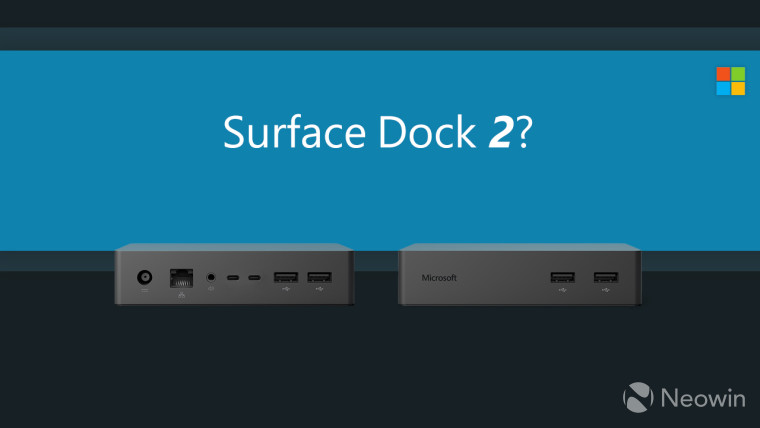 Microsoft launched the current generation Surface Dock back in 2015. The device brought a simpler design in the form of a box with ports, replacing the one that needed the Surface device to be slid into it. However, it’s been more than four and a half years since it has been upgraded. Now, new listings hinting at a Surface Dock 2 have surfaced on a Belgian eCommerce portal that lists the device at €244 (approx. $267).

While not much in terms of specifications is provided in the listing, Dr. Windows reports (via WinFuture.de) that the accessory will see some much-needed improvements while retaining the form factor and design. The two mini DisplayPorts on the back are said to be replaced by two Type-C ports (rendered above). The Ethernet port, audio jack, and two USB Type-A ports are expected to remain the same.

Additionally, there is ambiguity as to whether the two Type-A ports on the front have also been replaced with Type-C ports, which would be a huge step ahead for the Redmond giant. The company held off on adding the port to its devices for a long time, arguing against the addition. If these reports are indeed true, it might be a surprising move from the firm.

As for power delivery, the updated accessory is said to deliver around 200W, up from the 95W on the current device. This also is a welcome addition for users since devices such as the Surface Book 2 are known to draw more power when pushed hard. The increased power delivery also preps it up for future devices like the Surface Book 3 that may come with beefier specs. The accessory is also said to come with a longer connection cable, which will be a small yet useful addition.

Dr. Windows also found a 'MICROSOFT Power Supply 127w For Surface' listing on a Dutch website. It is not known if the product is an accessory for the rumored Book 3. The current Book 2 charger is a 102W unit. As for the Surface Dock 2, the listing states that the product will be “In stock within more than 15 days”. If this is indicative of the supposed launch date is anybody’s guess.

The Surface Book 3 and the Surface Go 2 were expected to be launched sometime in March. However, plans seem to have changed owing to the current COVID-19 pandemic. While it looks like the firm is prepping for the launch of these two products, there is no concrete information on when the company will launch the devices. It will not be surprising to see these accessories launched along with Book 3 and Go 2.