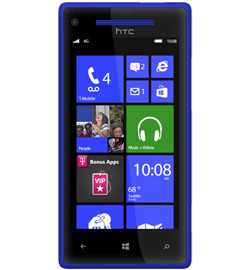 WPCentral.com reports that the update was supposed to be made available on Wednesday, but T-Mobile delayed the release to fix some last-minute issues. As we reported earlier this week, this update has a number of new messaging improvements, along with a way to have your favorite WiFi connections up front based on the connection history of the device.

The update also allows for Internet Explorer to be set up so it can stop the automatic download of images along with the ability to delete specific websites from the browser's history. Finally, there have been some new bug fixes and stability improvements.

There's still no word on when the "Portico" update will be released for the Verizon and AT&T versions of the HTC Windows Phone 8X. There's also no information on when T-Mobile's Nokia Lumia 810 or Verizon's Nokia Lumia 822 will receive the same update. Hopefully the rest of the Windows Phone 8 family will be able to get this software upgrade in the very near future.