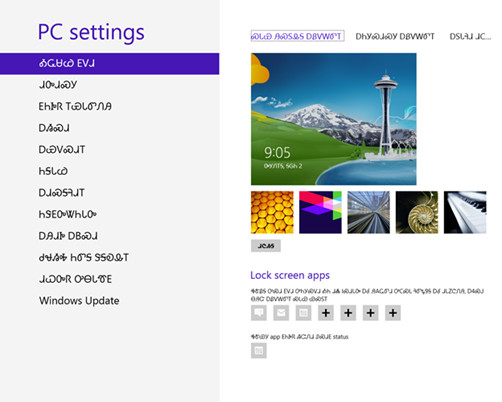 The Native American culture is one that has been mostly ignored by PC operating systems in terms of supporting their native languages. That is starting to change as a result of a collaboration between Microsoft and the Cherokee Nation that has results in the release of a new new Language Interface Pack for Windows 8.

There were some issues in putting in words in the language pack that are not normally a part of the Cherokee vocabulary. The blog states:

When terminology did not exist, the translation team had to rely on elders or ancient texts for reference in order to assist in creating a new word as required for the translation. In addition, a new modern sans-serif user interface font Gadugi - the Cherokee word for “working together” - was developed to allow the localization and maintain the Windows 8 design style.

In addition to the new Windows 8 support, the Cherokee language pack will also be made available for the upcoming launch of Microsoft Office 2013.