Imagine a massive supercomputer in the desert, watched around the clock by armed guards, capable of intercepting and decrypting virtually every piece of information in the world. Sounds like science fiction doesn't it? Well, according to Wired, the NSA is in the process of building just such a place, and they've made leaps and bounds of progress at breaking the standard AES encryption algorithm that keeps your emails and other private information secure.

This new surveillance center is being constructed in the Utah desert, near a town called Bluffdale. When it's finished, you'll be able to fit five US Capitols inside, and most of that space will be occupied by supercomputers capable of storing more data than you can even imagine (you can imagine a lot, can't you?). Your private emails, Google searches, receipts, travel information - pretty much ever scrap of data generated - will be stored here, while sophisticated software sifts through it in search of anything remotely suspicious. 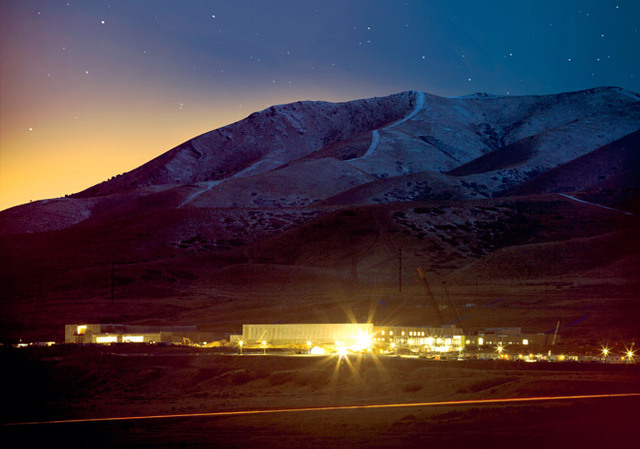 Basically, it's the realization of the Total Information Awareness program that Congress struck down way back in 2003 (we're not making that logo (seen below) up, by the way). So, then, how is it that the NSA has managed to carry on the project for so long? According to William Binney, the former chief of the NSA's Signals Intelligence Automation Research Center, they just don't give a damn.

Binney spent nearly 40 years of his life breaking codes and finding new ways to collect information, but the NSA's increasingly invasive methods were just too much in the end. When the NSA began warrantless wiretapping in 2001, Binney called it quits. “They violated the Constitution setting it up,” he says, "But they didn’t care. They were going to do it anyway, and they were going to crucify anyone who stood in the way."

Here's the scary part: Binney says that pretty much all Internet traffic is already subjected to deep packet inspection as it passes through existing surveillance centers, then analyzed by software looking for any red flags. This software is manufactured by a company called Narus, now a subsidy of Boeing, and it analyzes the data it collects against a backdrop of locations, names, numbers, keywords, and phrases. Anything remotely suspicious gets sent off for further examination and perpetual storage by the NSA.

Despite the efforts of Binney and others to put stricter limits and more legal guidance on what information is stored and limited, it's only gotten worse, and the NSA is storing most of the data that passes through, 'just in case.' After all, who knows what kind of goodies could be hiding behind encryption algorithms like AES? Now for the really scary part: they're working on that, too.

The AES (Advanced Encryption System) algorithm, available in progressively stronger 128 bit, 192 bit, and 256 bit variants, has been really hard to crack for even the most sophisticated computers. It's been speculated that the universe would end before a computer could try every possible code variant. By collecting more and more information, however, the NSA has a good chance of figuring out the algorithm's patterns.

The Bluffdale center will contribute to this effort, in addition to holding on to data that one day might prove accessible and useful. It's not all bad; chances are that there are some important secrets, potentially life saving secrets, hiding in some deeply encrypted communications somewhere. On the other hand, the potential abuses involved in storing all of that information and being able to crack these algorithms is pretty staggering.

As Binney told Wired, holding his forefinger dangerously close to his thumb, “We are that far from a turnkey totalitarian state.” There are a lot of arguments that could go here; is it legal? Is it ethical? Is it moral? But more importantly, is it worth the risk of becoming the very kind of power we're trying to hold at bay? That's for you to decide, before it's too late.