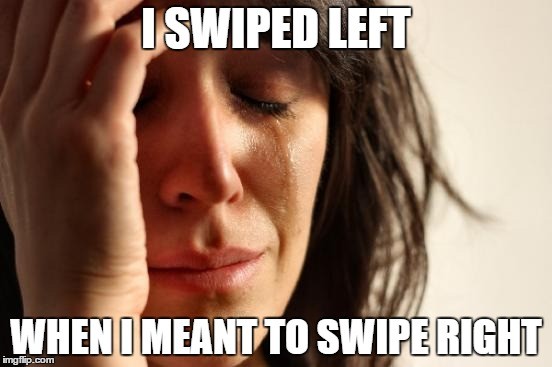 We have all been through that heart stopping moment when using Tinder, where we accidentally swipe left across the face of the one we would actually want to date, right...right? Well, not anymore. Tinder plans to release a new paid version of the app, Tinder Plus which will add two features to the dating app and also allow the company to earn some revenue from its app.

One of the features is an "Undo" button which will be positioned on your app screen as a large yellow button whether you are a premium user or not. This will undoubtedly tempt more people to pay for the service as they accidentally swipe left across a face. This yellow button will simply allow you to go back to the face you passed on.

Tinder's co-founder, Sean Rad emphasizes on the usefulness of this feature saying that:

“The most-requested feature we get is a button to go back and have a second chance with people that users swipe left on, everyone has wanted it from the beginning. It’s absolutely at the top of the list.”

The second service that Tinder Plus will unlock is a "Passport" button situated to the far right of the home screen. This will allow people to search for other matches outside of their general location, and toggle between those locations easily.

Rad was particularly excited about this feature stating that:

"We often hear that people want to be able to start swiping in a location before they've left to go on a trip or holiday, and that once they've actually made a meaningful connection with someone in a new location, their trip has come to an end. We also hear people saying that they want to get recommendations for places to go and where to eat in a new city, and Tinder Plus can do better at that."

Despite Rad's enthusiastic statement, there is a potential negative aspect to this service. That is, the service could point you to a potential match to some place not in your vicinity or some place you might not intend to travel to.

Rad, however dismisses this issue further saying that:

"We don't think it'll be a big enough problem where it will hurt the experience to search locally, a lot of users will be paying for the feature, and the voyeuristic quality probably isn't enough of a value add as opposed to those who are actually travelling."

For the time being, Tinder Plus will be released in a few countries as a part of the testing phase of the service. These countries reportedly include UK, Brazil and Germany with only 40% of the user base getting access to the premium features. Tinder has also not determined what the price will be for such a service, so will also be pricing the features differently, from $.99 to $4.99 to $9.99 and even $19.99 in some markets, to see what fits.

Are you willing to pay for a premium version of Tinder?

Source: Techcrunch via BBC |Image via The Huffington Post