The President of the United States, Donald Trump, has often been a target of critique and controversy due to his Twitter profile. Indeed, in the past, we've seen the investment banking company, J.P.Morgan Chase, create an index named 'Volfefe' to measure the impact of President Trump's tweets on the market. But now, in an unprecedented move, Twitter itself has flagged two of his tweets for misinformation and false claims. 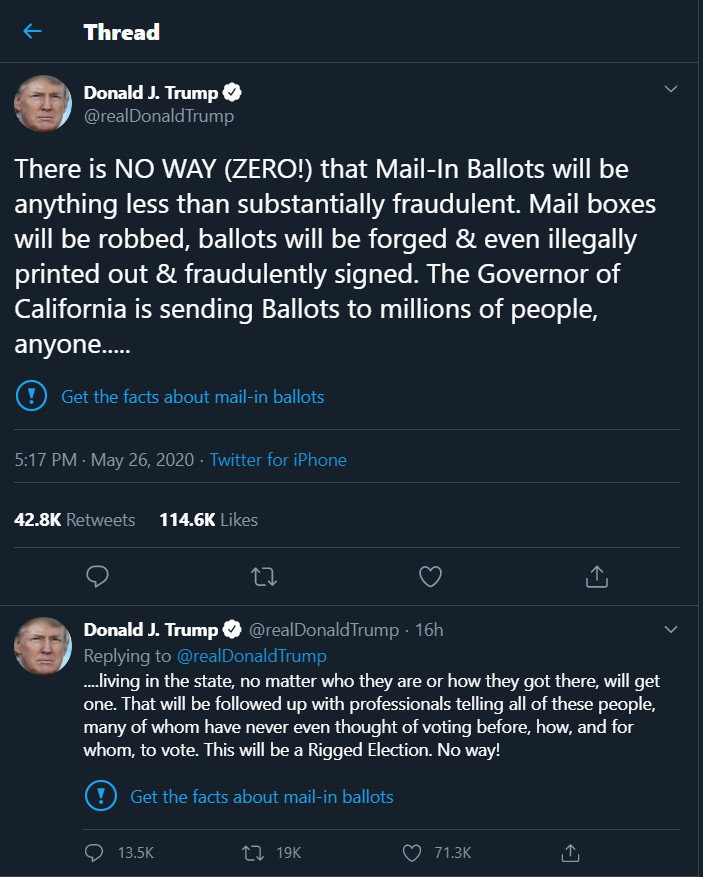 The tweets by Donald Trump that sparked the controversy are shown in the screenshot above. As it is evident from the tweets, the President of the United States establishes a direct relation between mail-in-ballots and rigged elections.

The thing to note here is the blue alert symbol shown beneath each tweet that reads 'Get the facts about mail-in ballots'. Interestingly, the warning disappears when embedding the tweet. Nevertheless, on the website, it is a clickable link that takes you to a Twitter Moment which states:

On Tuesday, President Trump made a series of claims about potential voter fraud after California Governor Gavin Newsom announced an effort to expand mail-in voting in California during the COVID-19 pandemic. These claims are unsubstantiated, according to CNN, Washington Post and others. Experts say mail-in ballots are very rarely linked to voter fraud.

Underneath this block, is a 'What you Need to Know' section which clearly states that President Trump has made false claims:

Moreover, a company spokesperson, Katie Rosborough, backed Twitter's initiative to flag the tweets as they “contain potentially misleading information about voting processes and have been labeled to provide additional context around mail-in ballots.”

President Donald Trump had a strong response to Twitter's actions stating that Twitter 'is now interfering in the 2020 Presidential Election'. In a subsequent tweet, he stated the social media website is 'stifling free speech' and that he would not allow this:

....Twitter is completely stifling FREE SPEECH, and I, as President, will not allow it to happen!

As noted before, this is not the first time that President Trump's tweets have spurred controversy. According to the Washington Post, earlier on Tuesday, the widower of a former staffer to Joe Scarborough asked the CEO of Twitter, Jack Dorsey, to delete President Trump's tweets that were "furthering a baseless conspiracy theory about the staffer’s wife’s death," as well.