Twitter has been adding more features to its service lately, such as photo tagging and multiple image uploads in one tweet. Today, the company revealed plans for a major revamp of its web-based profile pages, with some notable people already able to use the new design. 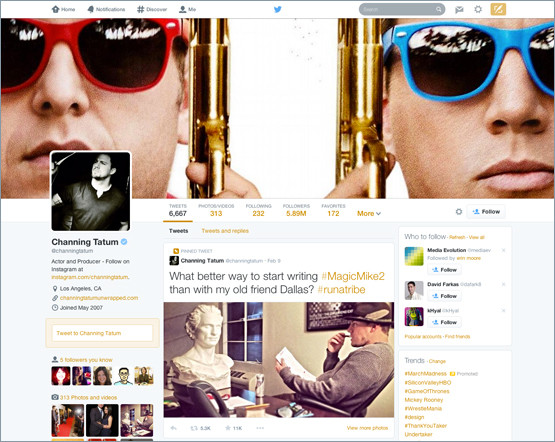 The official Twitter blog shows that the new look includes a much larger header image along with a bigger profile photo that looks a bit like Facebook's design. However, the new look is not just skin deep, this time. Twitter says that the web profile page will also allow users to see their "best tweets" more clearly, as posts with more retweets and interaction will be larger than others.

Also, users can pin a post up to the top of their profile page. This will be very helpful for businesses, media organizations and celebrities who want to keep a major news "tweet" front and center. Finally, there will be new filters so that people can disregard posts from others that don't have photos or have no replies.

A small number of Twitter users can already use and display their new profile pages, such as First Lady Michelle Obama and actor Channing Tatum. Twitter plans to roll out the design to the rest of its users over the coming weeks.