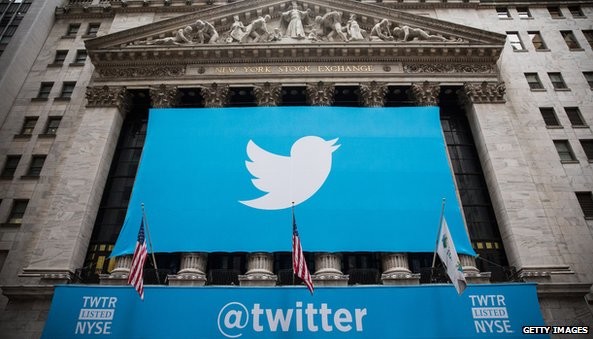 The NYSE opened today to much press attention as Twitter began trading with an IPO priced at $26 a share. Prices immediately rose to as high as $50 at one point before falling slightly to $45.10. Twitter logos covered the NYSE as the floor opened, with the official Twitter account determining a hashtag for the celebrations: '#ring'.

Financial Times reports that the company is now valued at $31.2 billion, up from the original $18 billion valuation for the IPO. CEO Dick Costolo is quoted to have favoured "clean and methodical" processes today, as he remains confident about Twitter's future. He also commented on recently international investments, which may finally help Twitter break a profit after some financially woeful years.

We will continue to make those investments as long as we see tremendous growth.

By selling 70 million shares, the microblogging service, that now has over 230 million users, will raise close to $2 billion. Twitter's IPO documents report that over 500 million tweets are sent per day, yet it still lost $69 million in the first six months of 2013.

In addition to broadening Twitter's investment prospects, all of Twitter's cofounders have been left significantly better off. Evan Williams' 10% stake is now worth over $1bn, and Jack Dorsey is now almost half a billion richer.

It is worth remembering that stock prices of new companies are never safe, as seen when Facebook's IPO price rose to $45 before slumping significantly. It now sits at $48, with little sign of serious growth. We can only hope Twitter will fare better.