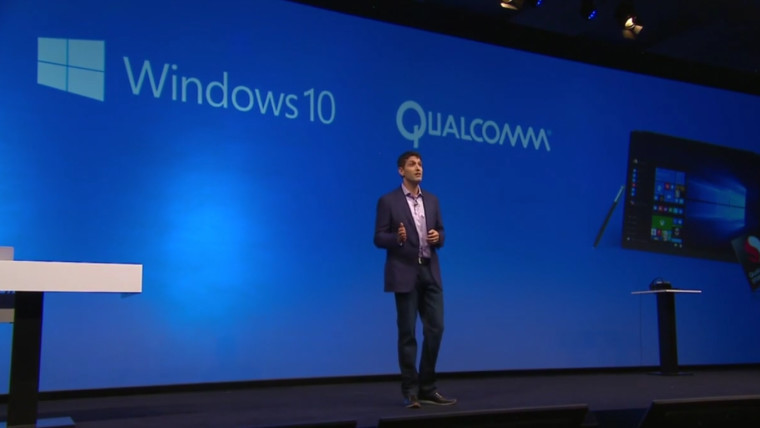 This week, Microsoft held its WinHEC conference in China, making a series of exciting announcements in its opening keynote. Now, you can watch the full video and see those announcements for yourself.

Perhaps the most significant revelation was that of a new partnership with chip-maker Qualcomm; Microsoft announced that it's bringing the full version of Windows 10 to mobile devices with Snapdragon chips, enabling users to run desktop-class 32-bit x86 applications on ARM processors through emulation.

Demonstrating that this ability will not be limited to the most 'basic' desktop apps, Microsoft showed off the full PC version of Photoshop running on a device with the Snapdragon 820 SoC - a chip that's already available on Windows 10 Mobile handsets, including the HP Elite x3 and Alcatel IDOL 4S. However, Microsoft told Neowin that devices with this capability will come to market next year with Qualcomm's newest Snapdragon 835 SoC, and it's not yet clear if it intends to enable this functionality on any existing devices.

Microsoft also announced details of Project Evo, a joint initiative with Intel "to deliver all-new ways for devices to light up with the latest in advanced security, artificial intelligence and Cortana, mixed reality, and gaming." The company told Neowin that the first devices from that collaboration will come to market in time for the 2017 holiday season. As part of those efforts, it also outlined some of its plans to compete with Amazon Echo and Google Home with its own smart home hub technology.

It revealed more details on its Windows Holographic mixed reality platform too, including the minimum PC specs required to power the new range of virtual reality headsets coming from its partners, priced from as little as $299. It's also preparing to launch its own HoloLens Development Edition headset in China next year.

The WinHEC keynote wasn't streamed live, but if you want to watch the announcements for yourself, you can now do so, as Microsoft has published the video from the event, which you can view below:

There are still many questions that remain unanswered about the company's plans, but we'll no doubt find out more in the weeks and months ahead. Considering the scale of Microsoft's ambitions in mixed reality, and expanding the capabilities of mobile devices, that's certainly something to look forward to.