Today, Microsoft released Windows 10 build 18262 to the Fast ring, the first new 19H1 build to be released in two weeks. The Fast ring is still getting builds for the next feature update for the OS, codenamed 19H1, despite the Windows 10 October 2018 Update being pulled due to issues. Fixes for that are showing up in the Slow and Release Preview rings.

Oddly, Messaging isn't on the list of apps that can now be uninstalled, as that app hasn't had a real purpose in some time.

This is a major change, and it's bound to be welcomed by many. Here's the full changelog:

Interested to know which of your running apps is DPI Aware? We’ve added a new optional column to the Details tab of Task Manager so you can find out the DPI awareness per process – here’s what it looks like: 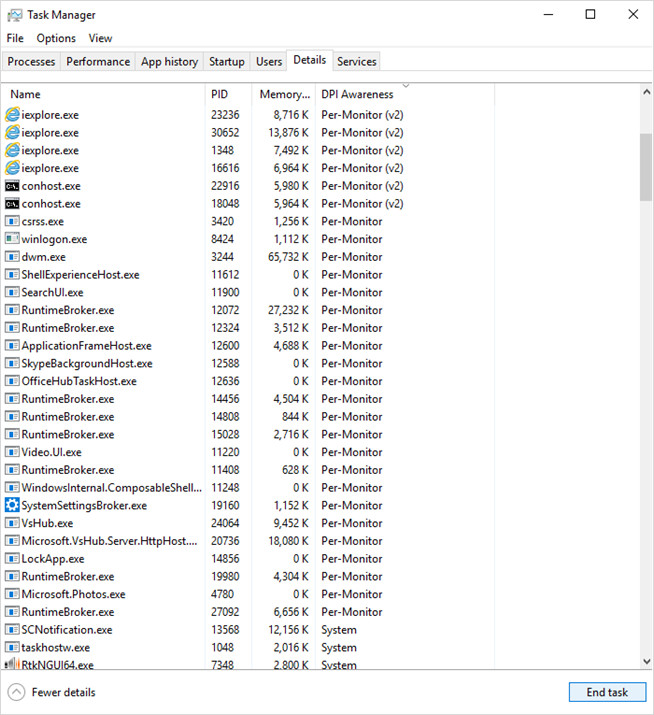 To show the column, right-click on any of the column headers in the Details tab, click “Select Columns”, then add “DPI Awareness” to the list. To learn more about DPI Awareness, see here.

In 19H1, we are adding the ability to uninstall the following (preinstalled) Windows 10 inbox apps via the context menu on the Start menu All Apps list:

In the Windows 10 October 2018 Update and prior, only the following inbox apps could be uninstalled via the context menu on the Start menu All Apps list:

Don’t feel like troubleshooting? We’ve got you covered. In previous releases, if you noticed your PC was having a problem, you would have to find the right troubleshooter and then manually walk through all the different steps to resolve it. We hear your feedback that the time that takes to do can be frustrating – why not just automatically fix issues that you know how to fix and can detect? We agree! If an issue occurs we want to get you back up and running as quickly as possible, so with Build 18262 you’ll find a new recommended troubleshooting setting under Settings > Update & Security > Troubleshoot in Build 18262. This feature uses diagnostic data you send to deliver a tailored set of fixes matching problems we detect on your device and will automatically apply them to your PC.

We’re still hard at work on this feature so it’s greyed out right now in Settings, but stay tuned for updates in future builds!

Narrator Read by Sentence: You can now read next, current and previous sentences in Narrator. Read by sentence is available with the keyboard and with touch. Move by sentence doesn’t yet work for Braille.

All of the other features listed are pretty minor. Microsoft still hasn't announced a lot of features that are to be included in next spring's feature update, so we'll likely be hearing more about it pretty soon.