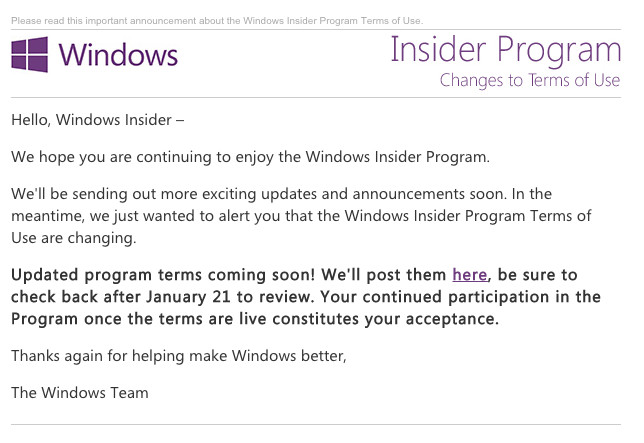 Microsoft has sent out emails to those of you in the Windows Insider program stating that the Terms of Service (ToS) will be updated on January 21st. Further, if you install the new build that will be released this month, this means you will accept the new terms automatically.

So what are the changes? Well, we do not know. Microsoft says that the changes will be posted up here, on Windows Insider's terms of use page, and that's about all we have for now. The full email is posted above but it is void of any real details.

So consider this your FYI if you somehow missed the email that Microsoft sent out stating the terms are changing. We don't expect anything major to be updated, and it likely has to do with new features being shown in the OS that were not previously covered with the current ToS (Cortana?).

Microsoft is hosting its Windows 10 event next week at its campus in Redmond, Washington, and we will be there to cover all the announcements as they occur.