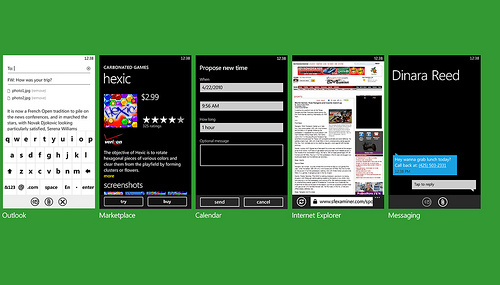 All Windows Phone users know that its multitasking isn't the best experience out there. The feature itself isn't well exposed, appearing only when long-pressing the back button, while the performance isn't that great. Nowadays most apps are "Mangofied" - updated in Windows Phone 7.5 to offer better multitasking support - but there are still some omissions. Then there's the fact that even if an app is already opened, tapping on its tile will simply reopen it from scratch instead of taking you to its saved state.

Well, we have some good news on this front. WPCentral are reporting that this behavior is getting fixed in the upcoming Windows Phone 8 OS. Tapping an app's tile will open the saved state of the app instead of simply restarting it. You can actually see this in action in some hands-on videos, for example where a user goes back to the photo hub, and the app shows the last picture the user was on, instead of the main hub page.

So this change, along with the increased number of apps you can have open at the same time (eight in Windows Phone 8, up from five in WP 7.5) should make multitasking more appealing for users.

If you want to see the behavior we're talking about you can check out this video. It happens about 10 minutes in, when the user opens the Photo Hub, goes back to the main page, then opens the hub again. The app shows the screen where he stopped earlier.

Update: It seems we jumped the gun a little with our enthusiasm. WPCentral got the word from a source they trust that this improved multitasking will only work for 1st party apps. To take advantage of this functionality 3rd party developers will have to use a small hack and list their apps as " GPS apps". However it's not clear if this will influence the certification process, which it might.

Will Microsoft expand this behavior to 3rd party apps? We sure hope so, because as it stands right now multitasking on Windows Phone is somewhat of a mess.