Apple has often found itself being unflatteringly compared to a ‘cult’, with millions of brainwashed followers slavishly devoted to supporting and praising its every move. Of course, this is a gross misrepresentation of a company that simply creates products that many consumers desire and aspire to own, but such sober assessments of Apple’s status never silence the comparisons of the company to a religious institution.

Curiously, however, recent developments in Russia depict Apple as anything but divine, as some Russian Orthodox Christians have apparently taken offence over the company’s logo, believing it to be intolerably evocative of the ‘forbidden fruit’ from the Garden of Eden in the Bible’s first book of Genesis.

Russia’s Interfax news agency reports that “some Orthodox believers, including priests” have begun obscuring the company’s “anti-Christian” logo on devices that they purchased from Apple, replacing the logo with crucifixes instead. 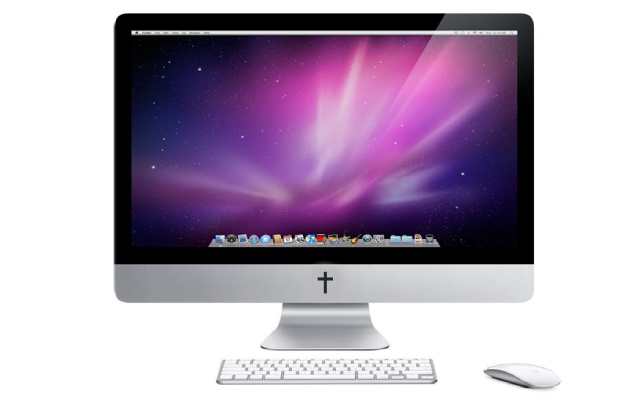 These believers are said to have taken issue with the bitten apple being a potent anti-Christian symbol, supposedly representing the ‘original sin’ committed by Adam and Eve, in which they each ate fruit from the tree that God had forbidden them to touch. Conversely, the cross is said to embody the redemption of mankind from that sin through the death and subsequent resurrection of Christ.

Religious community site, Christian Today, pointed to new laws making their way through Russia’s parliament as a possible indication that this state of affairs will only get worse for Apple. Legislation currently under consideration there proposes to crack down on blasphemy and “insults targeting religious, spiritual or national values”, and President Vladimir Putin – who was re-elected this year with extensive and very public support from the Russian Orthodox Church, throughout his campaign – is believed to be a staunch supporter of these new laws.

Given the rising prominence and influence of ultra-conservative Orthodox Christians in Russia, it’s claimed that things could get difficult for Apple there, should greater numbers of believers adopt a similiar mentality against the company’s branding.

Something tells me they probably wouldn’t see the funny side of making a joke at this point about the ‘Jesus Phone’.