In August, Microsoft launched the first public beta version of Windows Phone App Studio, allowing anyone to create a Windows Phone app via a web browser interface. Today, the company announced that it has revamped the UI for the service along with adding some other new features. 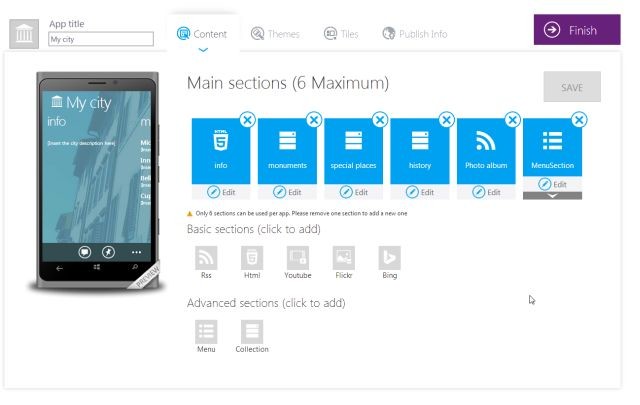 In a blog post, Microsoft said that the improved user interface has "streamlined the workflow" for developers and also has been designed to work better with touchscreens. The emulator now supports dynamic text updates so developers can now see any changes as they are made. Other new features include the ability to convert JPG images to PNG files, full image screen rotation, new templates for creating business-based apps and more.

Perhaps the biggest change is that users can now "generate a full Microsoft Visual Studio project containing both a Windows Phone and a Windows 8 version of your app, to make your app available through the Windows Store on Windows 8 and Windows Phone devices."

Microsoft also said that since its launch, 350,000 developers have accessed Windows Phone App Studio and made 300,000 projects. Of that number, 20,000 Windows Phone apps have been created and published so far in the Windows Phone Store.