It's obvious that Windows Phone 7 is trailing iOS and Android in developer interest. We know this because the user base just isn't big enough to allow anyone to really profit from the platform – but that’s most likely going to change with Nokia coming on board, and Microsoft giving the platform a leg up its upcoming Mango update.

A recent survey conducted by the Appcelerator indicates that the relatively new platform has a lot of growing to do before developers consider it a platform with investing into. 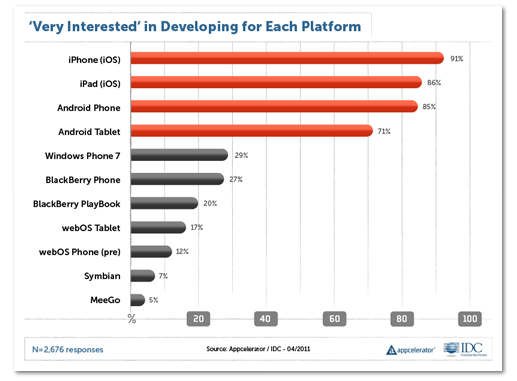 Interestingly (but perhaps predictable) is the way that this report was received by the blogosphere. Famed Microsoft blogger Mary Jo Foley discussed the survey results in an article titled "Survey: Microsoft's Windows Phone 7 a distant third in developer interest". She discusses the survey's results, pointing out that WP7 and Blackberry have both shown a fall since the last survey. Engadget, famous for expressive headlines, titled their article "Windows Phone and BlackBerry struggle to attract developer attention". There, a different story was told – indicating that both Microsoft and Blackberry were facing troubled times and 'uphill' battles.

The truth is that this survey doesn't tell us a great deal about how things really are. Less than one third of those asked actually responded to the survey (2760 developers), and the survey's results clearly show that Android and iOS interest has also decreased. However, what the survey does tell us is something that we already knew -- currently Android and iOS are the primary targets for developers -- and with those two operating systems holding almost two thirds of the US market share, this is entirely expected.