In the war of consoles, Microsoft may be losing to Sony in sales, but when it comes to customer support, the company seems to have conquered the hearts of its users. An undercover survey of the three big console manufacturers by Tom's Guide revealed Microsoft to be the best at addressing customers' concerns and problems, with Nintendo and Sony in second and third place, respectively.

The test was conducted by referring to each company's quality of support with regard to online services and telephonic conversations. Online customer support was given a higher priority of 60% over 40% for phone calls because it's far more common for customers to first search for solutions to their problems online than to call the customer care centre. Searching for queries online can also be faster in comparison to a call, where users may be required to wait for significant amounts of times. 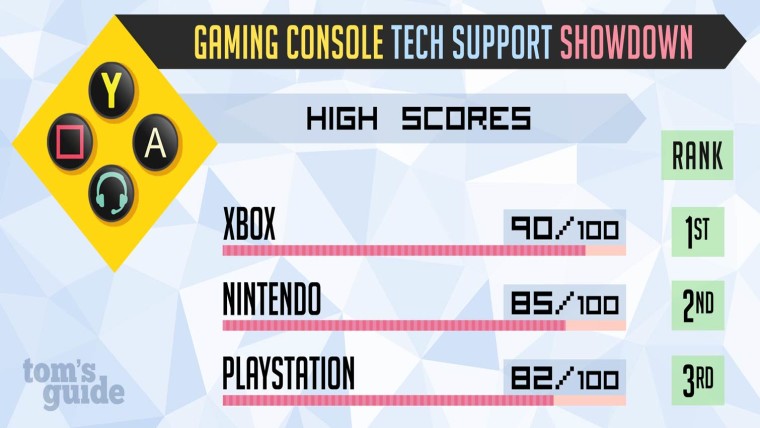 Xbox received an overall score of 90, with a perfect score of 60/60 for web and social support and an acceptable 30/40 for phone support. That stellar online service is what ultimately allowed Xbox to snatch this victory, as it's phone score was the worst of the bunch, with both Nintendo and Sony beating it with scores of 40/40 and 37/40, respectively.

The perfect score in phone support, a result of Nintendo employees' cheerful attitude and extremely quick service in solving issues, helped it secure second place with an online score of 45/60 bringing its total to 85.

The leader in console sales, Sony is the straggler of the group when it comes to support. Tom's Guide praised their phone support as being 'great' but the helpfulness of its service on online platforms was described as 'so-so'.

As Microsoft looks to address some of customers' concerns about the technical prowess of each console family relative to its competition with the release of exceptionally powerful hardware in the form of the Xbox One X, the combination of good specs and stellar support may allow the company to supersede its biggest rival if Sony isn't careful.