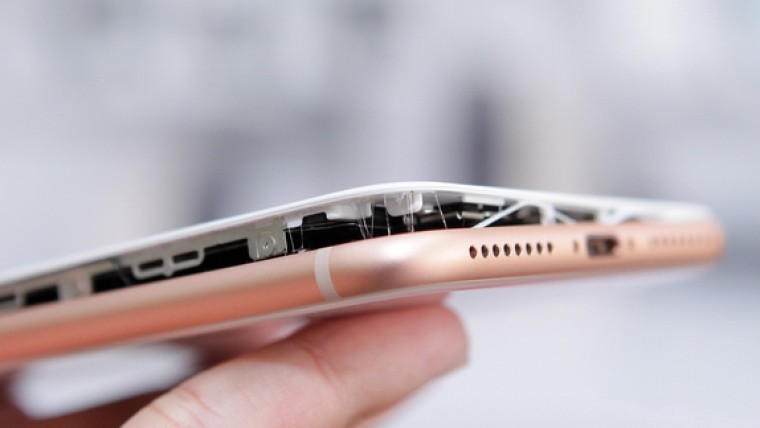 Two separate reports from iPhone 8 Plus users recall their new phones 'cracking open'. The likely culprit of these events may be a faulty battery but with only two reports, it's not a widespread problem rising to the scale of Samsung's Galaxy Note7 fiasco late last year, for the time being.

Chinese and Taiwanese media report that the woman in question, Ms. Wu, recently purchased her gold iPhone 8 Plus and that five days after the purchase, while she was charging the device, the phone's screen bulged upward and detached from the chassis. She confirmed she was using the official cable and charger and that the incident occurred around three minutes after she started charging.

There was no indication of a fire but some outlets are reporting the event as an 'explosion'. That description is not entirely true as the likely cause of the crack may be the battery swelling up due to a buildup of heat and pressure, which is a safety measure to prevent the device from actually exploding or catching fire.

Another man in Japan received a phone that was purportedly in such a condition in the box when it arrived.

There are also some reports that one of the battery manufacturers contracted by Apple is Amperex Technology Limited, the same company that provided the component for Samsung's Galaxy Note7. However, there is as yet no official confirmation of this information.

With only two confirmed reports, there's not enough evidence to suggest a larger trend and these may just be flaws in a few units in the production line. A few report of iPhone 7 units exploding were also found last year but those were also isolated incidents so there isn't much cause for concern, yet.

Source: cnBeta via The Next Web