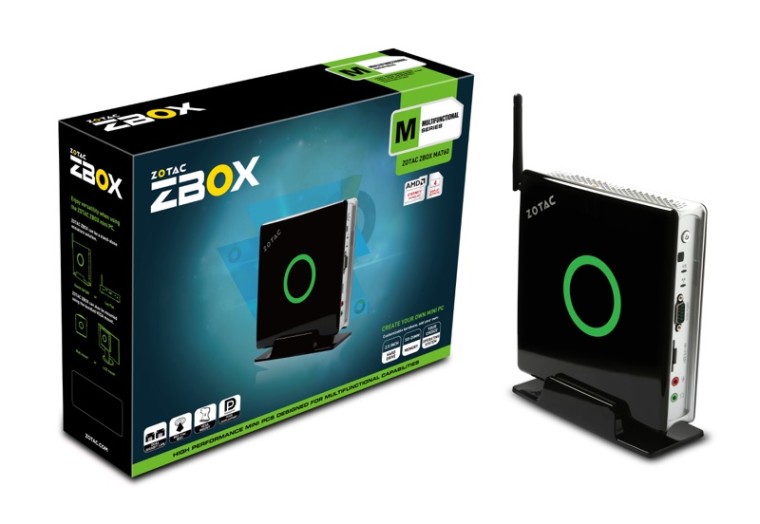 We live in an era with PCs that come in a number of form factors, from smartphones and tablets to laptops and desktops, offering a lot of options for both demanding users and regular folks. Among these are mini PCs, and Zotac has recently introduced an interesting one ahead of the Computex show next week.

Zotac is no stranger when it comes to making mini PCs, with ZBOX PI320 as a good example of a small device that can fit in a pocket and satisfy less demanding users. The newly announced device is the ZBOX MA760, which is a bigger cousin, and can drive up to four 4K displays, an impressive amount of power for its weight class.

Inside this tiny box is a 35 watt AMD FX-7600P APU, a quad core processor paired with 12 Radeon R7 Graphics cores, which should provide sufficient performance for basic office or media center use.

There are two versions, a "Plus" MA760 equipped with 4GB of DDR3 RAM and a 500GB hard drive, as well as a barebones model that comes with no RAM, storage, or operating system. The user can add up to two 204-pin SODIMM RAM modules, and there's a 2.5 inch bay for an SSD/HDD.

Connectivity wise, the MA760 has 4 DisplayPorts, 2 Gigabit Ethernet ports, 4 USB 3.0 ports, a stereo audio jack, and supports 802.11ac WiFi and Bluetooth 4.0. Zotac hasn't said anything about pricing, but we'll update this article when it is announced.