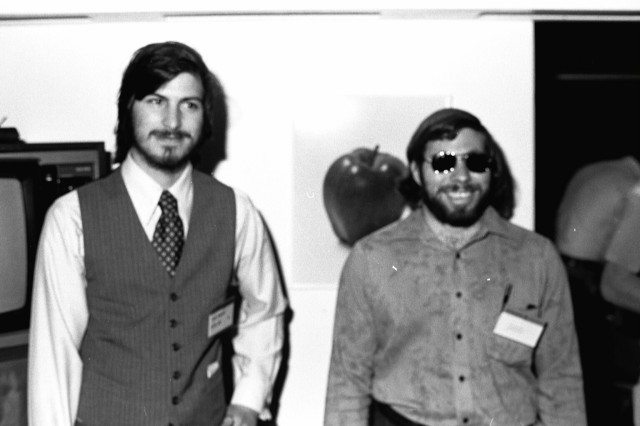 Steve Jobs (left) and Steve Wozniak in their early days as co-founders of Apple.

Videos from 1984 have emerged showing Steve Wozniak, the co-founder of Apple, giving a presentation at an Apple enthusiast meeting. The footage, which was uncovered by Vince Patton, shows Wozniak talking on a range of subjects, including pranks, quitting HP, and a rendition of the "One Notion Under Jobs" pledge of allegiance.

The videos are from 1984 and show a 34-year-old Wozniak. In 1984, Apple was just eight years old and about to launch the Macintosh, a project Wozniak was not heavily involved in, having developed the Apple I and II. Apple was just getting started in 1984, having garnered some success from the sales of the Apple I, II and Lisa. Wozniak was very different from Jobs, in that he was friendly and likable, while Jobs was cold and calculating. Wozniak was shy and never took up a managerial role in Apple, electing to stay as a mid-level engineer until he cashed out in the 1990s.

Patton found the videos on an old VHS, so don't expect good quality, but we've embedded them below:

Wozniak's Pledge of Allegiance to Apple:

Many claim that Apple has a "cult-like" following, and the "pledge of allegiance" reinforces that. Created by Jobs as a joke, Apple fans were required to recite the pledge before they purchased an Apple product.

Quitting HP to work for Apple:

Steve Wozniak was not convinced Apple would be successful, and didn't want to leave his stable job at HP to work at Apple. Eventually, Jobs persuaded him and the rest, as they say, is history.

On developing the Apple I:

The original PC, which included an integrated case. Wozniak was a "hacker" who thought all users wanted to build their own computers. Jobs dismissed this idea, and the Apple I was born.

On getting probation for computer abuses:

Both Jobs and Wozniak were fond of their pranks, and this helped form the friendship which changed the computing space forever. Wozniak took his pranks a bit too far on one occasion and got arrested.

On the development of the Apple II:

The Apple II was one of Apple's most successful early products and became the company's cash cow. The II included the same body as the Apple I, with additional features. The II was very much Wozniak's product, while Jobs worked on the 1984 Macintosh.

On hacking his hotel rooms:

On knowing that Apple would lose money:

When Apple launched, neither Jobs nor Wozniak had any idea how successful Apple would be. Jobs was very gung-ho about starting a company, but Wozniak was far more cautious about jumping from HP to Apple.

Woz on his pranks at college:

On HP rejecting what would become the Apple I three times:

Orignally, Jobs and Wozniak tried to license their idea for the Apple I to HP. The executives at HP didn't think the idea was any good, so turned Apple down.