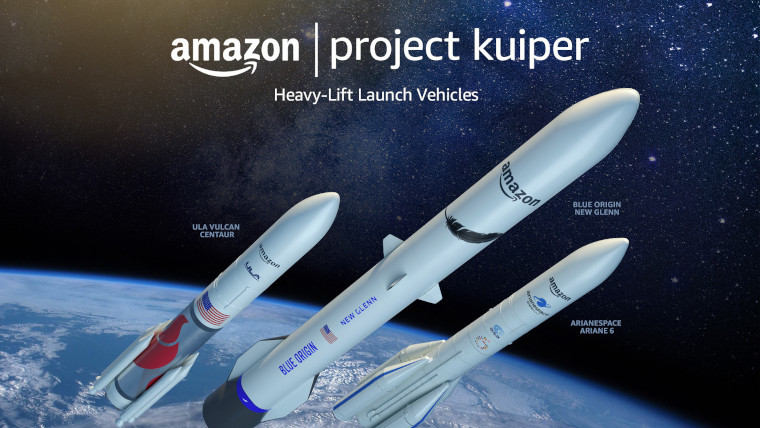 Amazon has announced that it has secured 83 launches with Arianespace, Blue Origin, and United Launch Alliance (ULA) to put its internet satellites into low Earth orbit at a relatively low cost. The launches will span a five-year period and will see Amazon deploy up to 3,236 satellites to make up the Project Kuiper constellation. The company noted that it's the largest ever commercial procurement of launch vehicles in history.

The three rocket models that will carry these satellites into orbit include:

“Project Kuiper will provide fast, affordable broadband to tens of millions of customers in unserved and underserved communities around the world. We still have lots of work ahead, but the team has continued to hit milestone after milestone across every aspect of our satellite system. These launch agreements reflect our incredible commitment and belief in Project Kuiper, and we’re proud to be working with such an impressive lineup of partners to deliver on our mission.”

The service is envisioned to work just like SpaceX’s Starlink satellites and OneWeb’s internet satellites. Amazon wants to provide high-speed broadband to all sorts of customers including individual households, schools, hospitals, businesses, governments, disaster relief operations, mobile operators, and anyone in areas with bad or no internet connectivity. While no pricing has been revealed, the company says its receivers will be affordable – for comparison, Starlink receivers are £529 in the UK with connectivity costing £89 per month.

The launch procurements will help the launch industry refine its processes so that it can bring down the cost of launching satellites, opening the path for more services in the future. It will also drive job creation in the United States and Europe, giving those economies a boost. Be sure to keep an eye on Neowin's rocket launch series, This Week In Rocket Launches, as we will be sure to cover these launches!