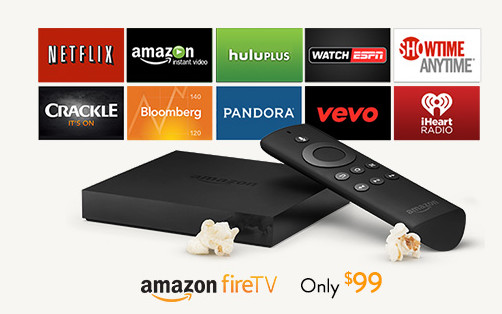 After months of waiting for an announcement, Amazon has finally unveiled its latest project at a press event in New York City. The Fire TV is similar to set-top boxes like AppleTV and Roku. However, Amazon has decided to take a different approach to its product by minimizing the convoluted menus, increasing performance of the experience, and making the product more accessible.

Amazon's goal of simplifying the experience has been channeled into the menu system and its unique ability to initialize voice searches by speaking into the remote. The Fire TV will also allow users to enjoy detailed information on the actors and shows as you are watching them. Fire TV will also support music streaming services like Pandora, iHeartRadio, TuneIn, and music you have purchased from Amazon. Amazon has also created a custom interface for children called FreeTime. This interface will allow parents to limit what their children can watch and set limits on how long they can watch.

Lastly, Amazon Fire TV will have support for gaming. Gaming studios Disney, Gameloft, EA, Sega, Ubisoft and Double Fine are on board to support the device and it will have 1000's of games in the near future. Amazon will also offer a dedicated gamepad for an additional $39.

The interface will be simple and feature a column to the left with various categories:

Naturally, Fire TV will support Netlifx, Hulu Plus, WatchESPN, VEVO, SHOWTIME, Crackle, and YouTube. Additional channels like WWE Network, MLB.TV, WATCH Disney Channel, WATCH ABC, Twitch and more will be added in the future. The Amazon Fire TV will be available today for a price of $99.