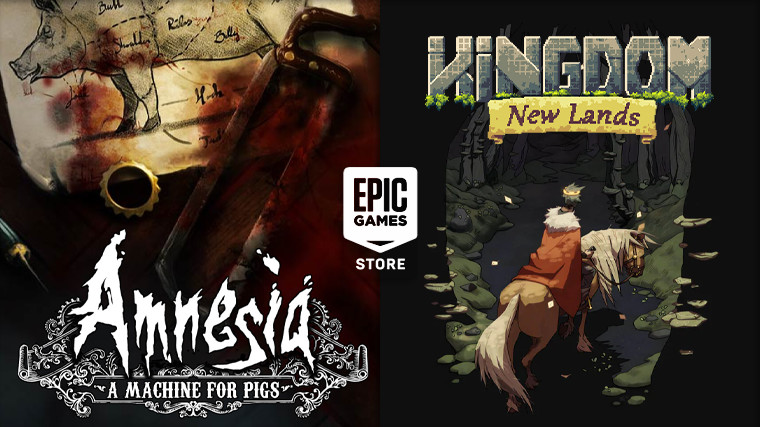 Epic Games Store is returning with even more giveaways this week, and stepping up to the freebie stand this time are two games, Amnesia: A Machine for Pigs and Kingdom New Lands. The games aren't new to being given away, but it's a good opportunity for anyone who missed out on previous promotions.

Amnesia: A Machine for Pigs is an indirect sequel to the massively popular horror title Amnesia: The Dark Descent, continuing the first-person survival horror experience. However, the original game's developer, Frictional Games, only published this entry, with The Chinese Room taking on the development duties.

Here's how the Epic Games Store describes the horror game:

Wealthy industrialist Oswald Mandus awakes in his bed, wracked with fever and haunted by dreams of a dark and hellish engine. Tortured by visions of a disastrous expedition to Mexico, broken on the failing dreams of an industrial utopia, wracked with guilt and tropical disease, he wakes into a nightmare. The house is silent, the ground beneath him shaking at the will of some infernal machine: all he knows is that his children are in grave peril, and it is up to him to save them.

Meanwhile, Kingdom New Lands returns as an Epic giveaway title. The game is a side-scroller that focuses on simplicity, and is made by a two-person development team. The player takes the role of a monarch that roams the lands while collecting resources, fighting monsters, recruiting subjects, and building up their kingdom.

Kingdom is a minimalistic micro strategy game with modern retro aesthetics and an ambient soundtrack. Players take control of a monarch struggling to build their kingdom from nothing by exploring the world, recruit loyal subjects and defend from the nightly Greed attacks.

Epic Games Store is offering Amnesia: A Machine for Pigs and Kingdom New Lands for players on Windows and macOS, however, Linux versions of these games are available for purchase on Steam with $19.99 and $14.99 price tags, respectively. Minimum requirements can be seen below:

Amnesia: A Machine for Pigs and Kingdom New Lands can now be claimed by heading over here, with them being part of the freebie promotion until October 22. Next, Epic plans to giveaway Costume Quest 2 and Layers of Fear 2.