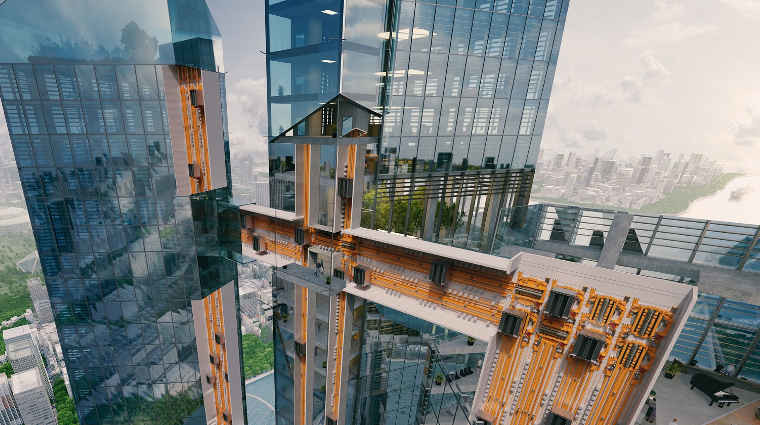 German company Thyssenkrupp, is working on a new rope-free elevator system they call the MULTI, they say it will bring in a new era of mobility in buildings and building design.

The original rope elevator system that dominates buildings today was developed over 160 years ago and Thyssenkrupp argues that this completely limits and defines the way in which many tall buildings are designed and built as the architects are ultimately limited by the access to the straight up-and-down shafts.

The MULTI system that is being developed uses the same linear motor technology that is present in magnetic levitation trains, it essentially gets rid of the conventional rope and counterweight systems making the elevator cab into a small train whose tracks are up the walls of the building.

Thysenkrupp is one of the companies that equips its workers with the VR Hololens system for maintenance tasks, so it is no surprise that it is developing such a groundbreaking innovation, the company says this will be nothing short of a revolution in building design, but it also argues that this kind of innovation is crucial, as by the end of the century 70% of the world's population will be living in urban areas. And in these urban areas, tall buildings are the best option as they have a small ground footprint which saves lots of space. In ThyssenKrupp's promotional video we can see the elevator cars even moving sideways between different buildings and there are multiple elevator cars in one shaft, this clearly means the amount of people that the elevator system can move around and the number of destinations increases significantly and reduces the amount of time people will be waiting for elevators.

The company also explains how the MULTI elevator system uses elevator cars that weigh only 50 kg compared to the 300 kg of current elevators which means the new cars could make a significant saving in energy consumption.

Overall, this seems like a bold new idea that may transform the skylines and transport of the future. And if we let our imaginations run wild for a moment, in the not too distant future you could hop onto a Hyperloop in Washington DC and 40 minutes later an elevator could be taking you sideways between two buildings to your office in New York City.