Apple has begun sending out media invites to a new event to be held next Thursday, January 19th, in New York City, confirming earlier rumblings of a New York based keynote event. The Loop broke the story of the event, which will be the first Apple has held since the death of co-founder and former CEO Steve Jobs.

Join us for an education announcement in the Big Apple.

Rumors began swirling earlier this month of a 'media related announcement' coming from Apple. Unsurprisingly, the internet lit up with Apple fanatics speculated over just what the event would reveal, with rumors centering on everything from an upgraded iBooks to new developments of iAd or Apple TV. Instead, there's a good chance that Apple will be taking a step into a new market: textbooks. 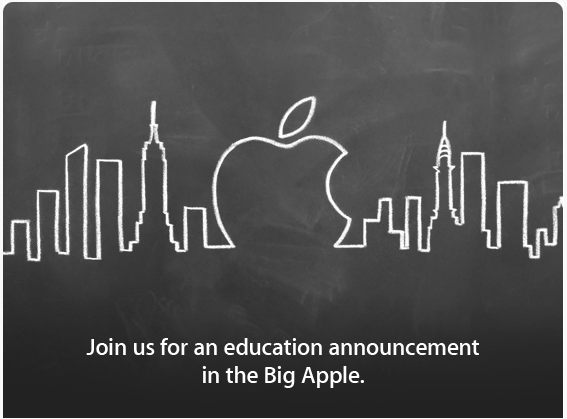 Walter Isaacson, author of the eponymous biography of Steve Jobs, wrote that Jobs had expressed an interest in entering the company into the textbook market, replacing the bulky, outdated textbook with a light, thin iPad. Establishing a dominant position in the textbook market would open Apple up to a whole new market as the iPad became an essential accessory for schoolchildren throughout the world.

He held meetings with major publishers about partnering with Apple, the book says. If textbooks were given away free on iPads he thought the publishers could get around the state certification of textbooks. Mr. Isaacson said Mr. Jobs believed that states would struggle with a weak economy for at least a decade. “We can give them an opportunity to circumvent that whole process and save money,” he told Mr. Isaacson.

It's unlikely that the event will bring any game changers to the wider technology market but it could be a game changer for the educational system. On the other hand, it's hard to rule anything out with an Apple event. It's going to be very interesting to see Apple's first keynote in the post-Jobs era, as well as the reaction it garners.