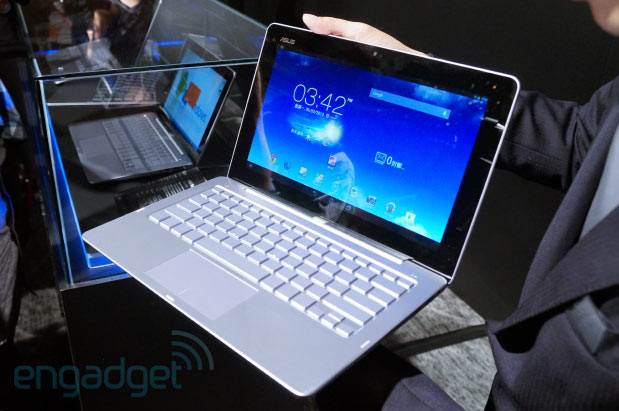 Asus announced a bunch of new PCs and tablets today as part of its Computex 2013 press conference today in Taiwan. Perhaps the most interesting product reveal was the Transformer Book Trio, which the company says can run both Windows 8 and Android on a device that serves as a notebook, tablet and even a desktop PC.

Asus is no stranger to this kind of dual OS product. Earlier this year it announced the Transformer AiO, which ran both Windows 8 and Android on a large 18.4 inch all-in-one PC. The new Transformer Book Trio, as reported by Engadget, is basically a much more portable version of the Transformer AiO. It has a screen that can detach from its included keyboard dock to serve as a separate Android tablet, with Intel's 2 GHz Atom Z2580 chipset and 64 GB of SSD storage inside.

However, when the 11.6 inch tablet is connected to the keyboard dock, the screen can then be used in Windows 8 mode, with a fourth generation Intel Core i7 processor and an 1 TB hard drive running things. The keyboard dock also contains its own battery. The desktop part of the Transformer Book Trio comes when the keyboard is connected wirelessly to a larger PC monitor.

It's certainly a cool sounding product but at the moment, there's no word on a price for the Transformer Book Trio from Asus. It's expected to launch sometime in the third quarter of 2013.