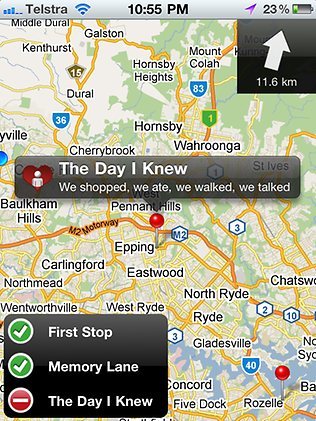 An Australian man has taken the art of the geek proposal to another level after leading his bride-to-be on an 11-hour treasure hunt via an iPhone app he designed himself.

According to news.com.au, Sahba Idelkhani spent three years working on proposal ideas before settling on an Amazing Race-style iPhone app that would lead his girlfriend Melody on a 200km (124mi) trip down memory lane. After perfecting his design Mr Idelkhani paid a Texas-based game developer AUD$1500 to write the app.

Using the iPhone's GPS and Google Maps, the app led Melody to various locations around the city of Sydney, each in some way special to the couple's relationship. As she arrived at each location, a message would appear on the phone's screen, and Melody was required to take a photo at each location to prove she had been there.

The app also threw in a dash of social networking, with family and friends able to track Melody's progress via Facebook. iPhone in hand, the couple spent the better part of a day following Mr. Idelkhani's clues.

''I tried to optimise it so we didn't have to keep going back and forth, but considering we went to like, I think it was 12 different places, there was still a bit of travel,'' he said.

And in a final twist, Melody was prompted by the app to use a bit of ingenuity and a few simple tools to uncover a message that had been hidden right before her eyes for three years.

"The final level (of the game) prompted her to go into the master bedroom, saying there was something in there for her," Mr. Idelkhani said.

Inside the room she found two teddy bears and an unstitching tool. After a bit of work on one of the bears, the final piece of the puzzle fell into place.

''Inside it was a note that I put in there three years ago, which was a message saying: 'Will you marry me?','' he said.

''I was confident that she was the one so I planted that in there just in case. I was pretty confident it would happen, but if it didn't it would be hidden in there forever anyway.''

And none of Mr. Idelkhani's efforts went to waste - the couple are now planning a simple, outdoor wedding.