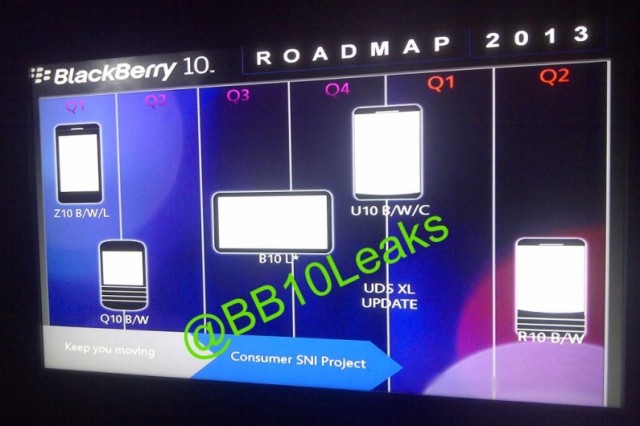 Leaked by an anonymous Twitter account, @BB10leaks, a new BlackBerry 10 roadmap outlines a number of interesting devices that may soon head our way.

Despite a mysterious Twitter account not being a traditionally accurate source of information, should the leaked image prove to be legitimate, it does show a diverse and interesting future for the company. The roadmap shows the company's plans to release a 10-inch tablet, a phablet (large smartphone), as well as a touch device with BlackBerry's signature physical keyboard.

Casting aside devices that have already been announced - the Z10 and Q10, the most imminent device in the rumoured line-up is the "B10 L", a device seemingly holding a tablet form-factor. Previously, BlackBerry released the "Playbook", a 7" tablet met with mixed reviews. In the end, sales fell far short of targets causing the company to drop the device from future development. It would, however, seem that BlackBerry haven't given up on the tablet just yet.

Next up is the "U10" which, we would guess, looks to be a larger device likely containing a screen around 5" in size. In light of the release of such devices as Samsung's Galaxy S4 and HTC's One, BlackBerry would be expected to compete with an equivalent "phablet" device. Following on from that, the "R10" is a device half-confirmed by CEO Thorsten Heins to appear this year. Offering a design close to the Curve, the R10 would most likely appeal to existing business customers unable to tear themselves away from a physical keyboard.

Whether the image is real or not, BlackBerry must produce a viable line-up of products this year that can bring the company to recovery. With an ailing business clientele, BlackBerry must also appeal to consumers in order to tap into the majority market share held by Apple (iOS) and Google (Android).