Bluboo is a lesser-known smartphone maker from Shenzen, China, which has been making inexpensive devices that mainly feature entry-level specifications and are sold online. The company launched its new Edge smartphone back in January with a Galaxy S7 edge-inspired design at a much lower price point. It seemed like an interesting device from the images that I saw online, so I decided to check it out.

The Bluboo Edge is priced at about $130 but can be purchased for much less during flash sales. At this price, it is an ideal competitor for the Redmi 4A, Redmi 4, and the Moto G4 Play. In this context, it should already be clear that it's going to be a tough battle for the Edge, so let's see whether it can win the customers' hard earned cash in the entry-level market.

The box contents of the Bluboo Edge are pretty much what every other manufacturer offers in this price range, including the smartphone itself, a charger, a micro USB charging cable, a SIM removal tool, and a bunch of documentation.

In addition to these, Bluboo has added a hard plastic back-cover, and a tempered glass screen protector with the handset. Including these makes sense because the smartphone is a bit slippery, and the curved glass design may not be able to handle falls that well.

Bluboo has taken a little extra inspiration for its version of Edge from the Galaxy S7 edge, with only a few subtle changes that can tell the two apart from a distance. It isn't a completely bad thing, considering that the Galaxy S7 edge looks amazing. However, Bluboo doesn't offer the same level of finish on its device, as the back of the device is not made of glass. 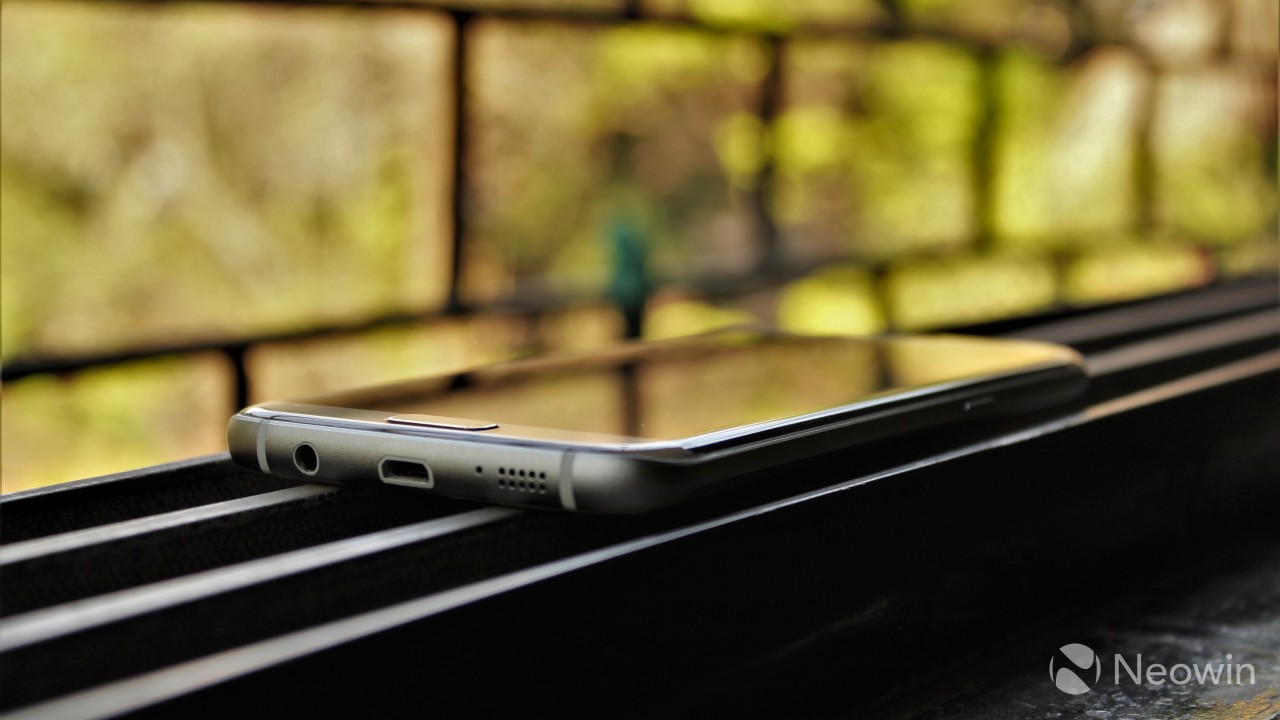 The smartphone is a bit slippery and features a glossy metallic back that heavily piles up fingerprints. There is no unibody construction here, but the battery is non-removable, and the back plate is glued to the midframe for good measure. For a smartphone featuring a lowly 2,600 mAh battery, the Edge is rather heavy at 203 grams, and the protective cover adds some more to it. 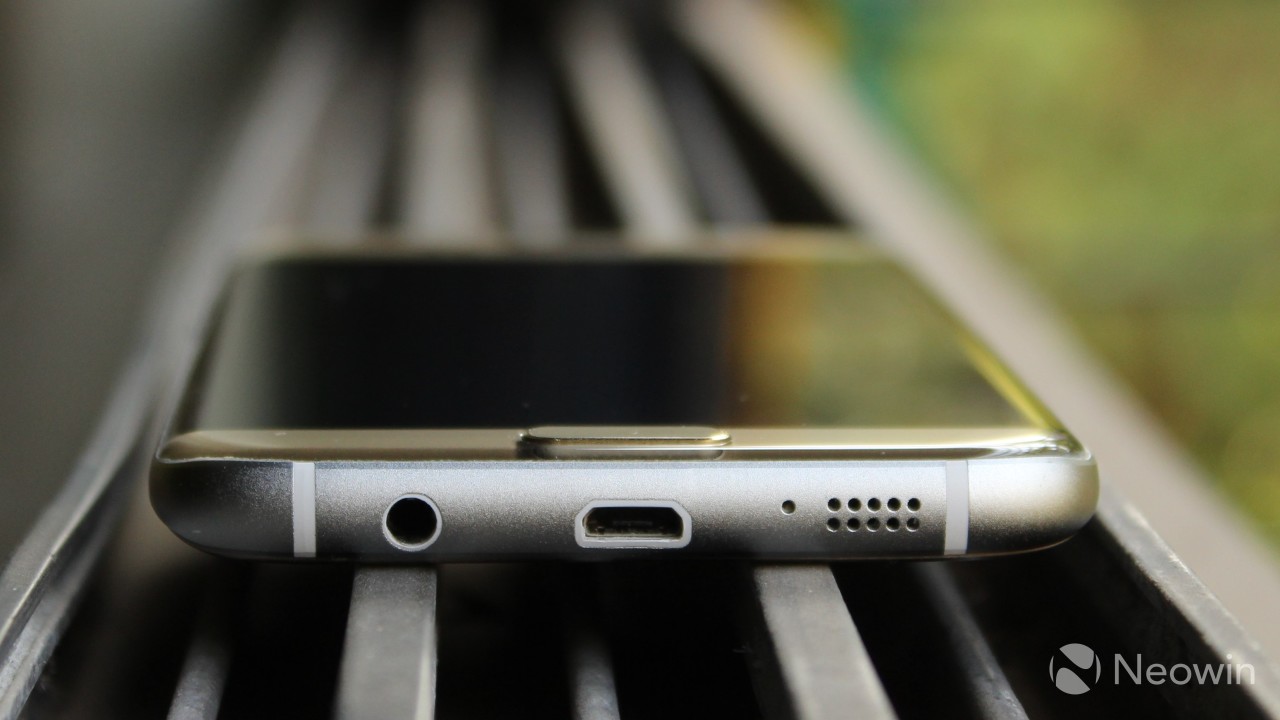 On the front, things look better, and the curved screen makes the smartphone a little more attractive than its back side. The button, camera, and sensor placements on the Bluboo Edge are also identical to the Galaxy S7 edge. Volume buttons are placed on the left edge, the power button on the right, the USB connector and the 3.5mm headphone jack at the bottom, and the sim tray on top. 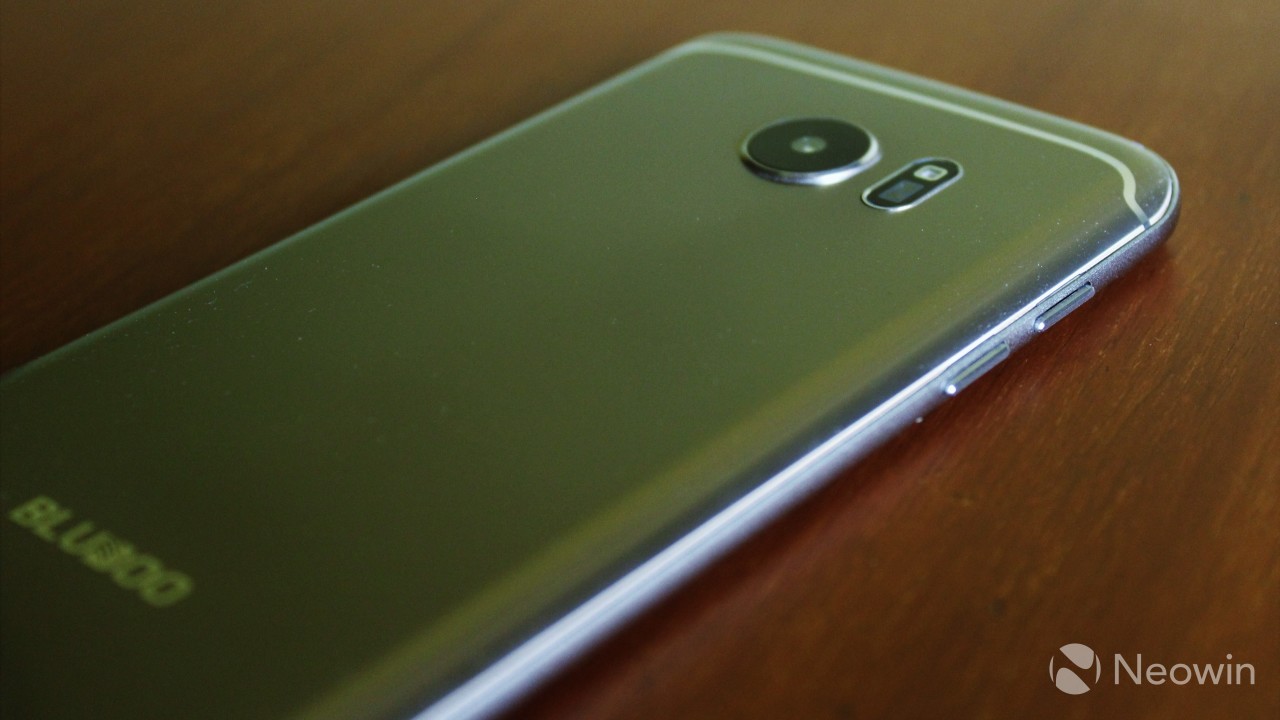 There is a heart-rate sensor present next to the rear camera, while the fingerprint sensor is housed inside the home button. Just above the screen, the smartphone features a front-facing camera, an ambient light sensor, proximity sensor, and a notification light. Overall, I can certainly call it a Galaxy S7 edge clone that looks and feels equally nice.

Bluboo has gone with a 5.5-inch IPS LCD panel on the Edge with one-glass solution (OGS) technology. The curved Gorilla Glass 4 covers the entirety of the phone's front face. The display's 720p (1280x720) resolution is not the most pixel dense one, as it roughly translates to just 267 pixels per inch. However, at this price, it's a standard resolution offered by all manufacturers. 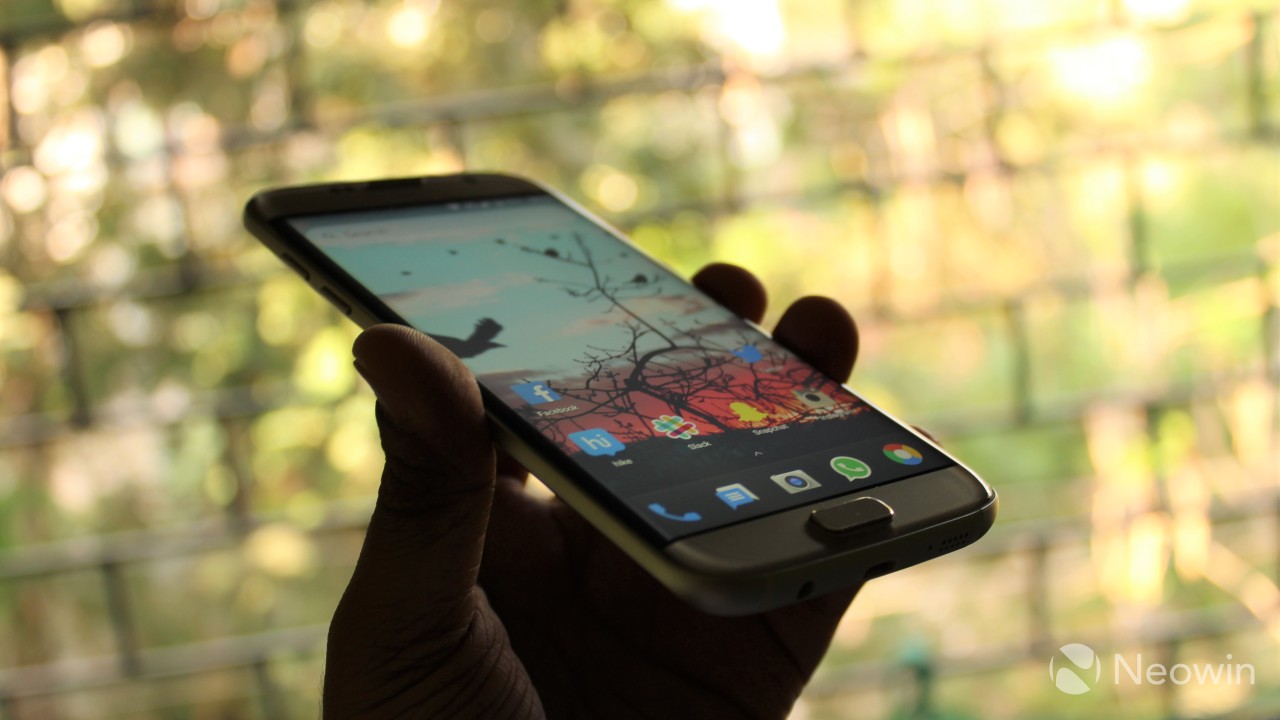 The display's color reproduction is decent enough, but for me, the Xiaomi Redmi 4A has the best display out there in this price range. It must be noted though, that the Redmi did not feature Gorilla Glass protection, and the screen size was 5 inches.

Under direct sunlight, the Bluboo Edge's display sufficiently brightens and is clear enough. Speaking of brightness, the screen remains very bright even in dark lighting conditions, with adaptive brightness turned on. In manual mode, the brightness slider isn't properly calibrated to help in such situations, but that may not be an issue for all.

The curved glass definitely gives the screen an amazing look, and it would have been even more impressive if the underlying LCD was also curved as in the case of the Galaxy S7 edge. On the Bluboo Edge, it remains a gimmick that just looks good.

The Bluboo Edge does the bare minimum in terms of audio, as the sound quality is nothing exceptional, but seems sufficient for an entry-level offering that probably would only be used as a secondary device. The phone receiver and the loudspeaker are clear enough, and the output from the 3.5mm headphone jack is also reasonably good.

On the network reception and phone call side of things, the device performs well in ideal conditions. In closed areas, however, it had a very difficult time locking on to a 3G or 4G cellular signal and often ended up using 2G connections, while other smartphones had no such problem. In open areas and within thin walls, the reception was decent enough compared to that in the extreme interiors of buildings.

Overall, I think Bluboo needs to rethink its antenna placement if that is causing the issues, or support more bands in its devices to counter the indoor reception problem.

Bluboo has fitted a 13-megapixel camera in the smartphone, which uses a Sony IMX219PQ Exmor R sensor. The camera does well in daylight and is capable of capturing usable photos when shot with extra care and focus. In cases of low light, the rear camera simply cannot focus and keeps readjusting until some form of light can be detected.

The 5-megapixel front facing camera produces very dull and soft images, that look washed out and noisy. It's difficult to use the front camera for Snapchat or Instagram stories, as the poor quality is immediately noticeable in the preview itself.

When capturing images using Instagram, Snapchat, VSCO, or other similar apps, the output is much darker than that from the built-in camera app. I have noticed this issue in many other smartphones from Chinese manufacturers, and I don't think Bluboo will issue any update to fix it.

Video capture also gives out similar results as the still images, which means the daylight ones are better than low light. Framerate leaves a lot to be desired, as it appears to be slower than the promised 30 frames per second. You can check out the various samples below.

Bluboo has retained nearly stock Android 6.0 Marshmallow on the Edge, with a custom launcher of their own, which features strange-looking icons and lacks an app drawer. The rest of the interface remains unchanged from what you would expect to see on stock Android. 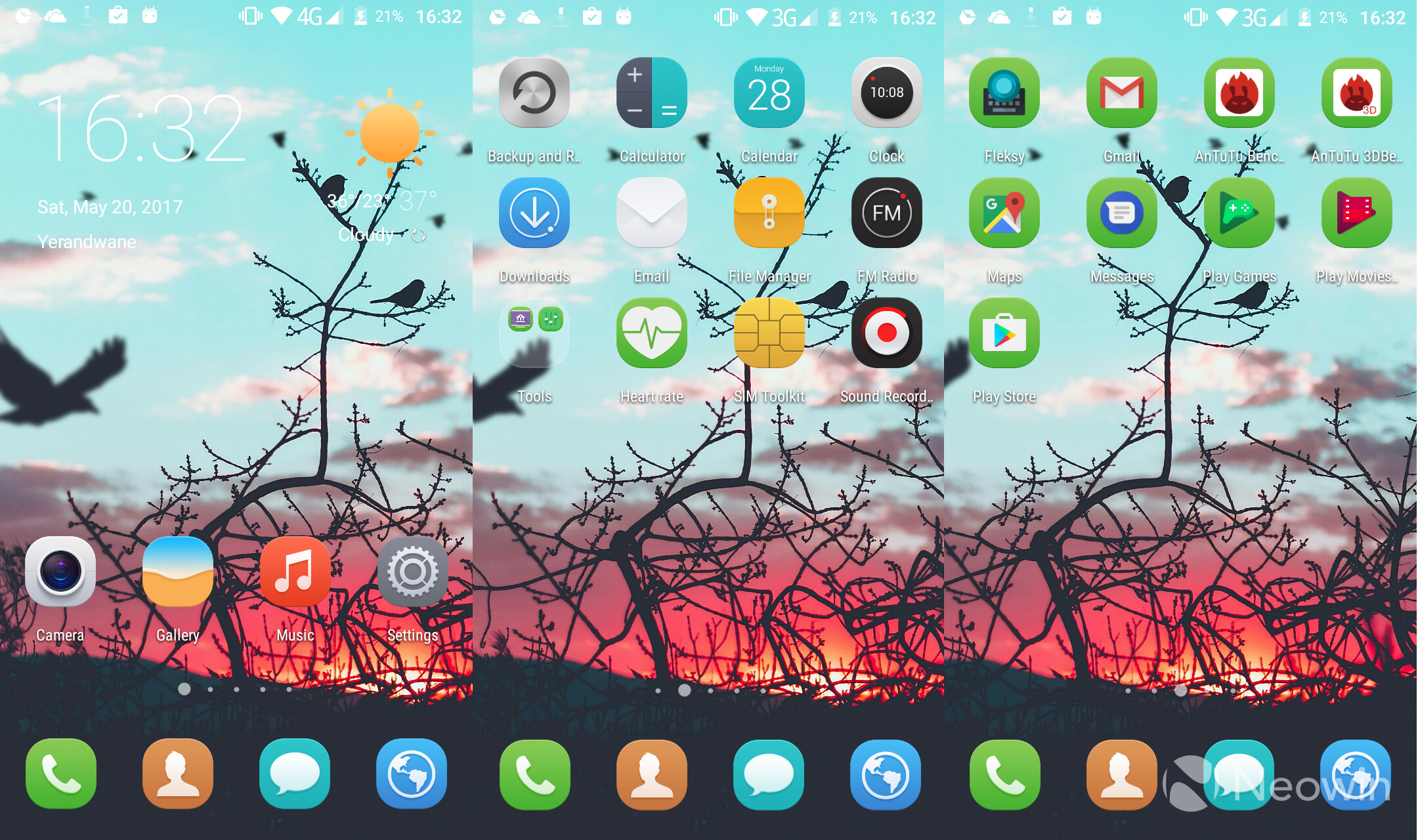 At first, the software was quite responsive and usable, but after a few days I started running into numerous crashes and the device would occasionally reboot if all the RAM was used up. Even though there is no bloatware pre-loaded with the smartphone, the launcher used by Bluboo is flagged as adware by Kaspersky and it does indeed show popup ads once in a while. This too seemed like a major concern about the software to me, especially in the wake of news pertaining to pre-loaded malware.

The manufacturer could have created a decent performing smartphone by maximizing its use of stock Android, but there's a trend among Chinese manufacturers to push certain customizations that often lead to a poor user experience. It may be difficult to live with the device's user experience issues if you intend to use it as a primary device and it's the biggest deal breaker in an entry-level smartphone.

The Bluboo Edge features a MediaTek MT6737 quad-core chipset clocked up to 1.3 GHz and 2GB of RAM. If you look at the competition, the Redmi 4A and the Moto G4 Play, both feature Snapdragon chipsets, which offer improved performance over the year-old MediaTek chipset used in the Edge. The device's real-world usage and benchmark scores don't help support its case against the stellar offerings from its competitors. 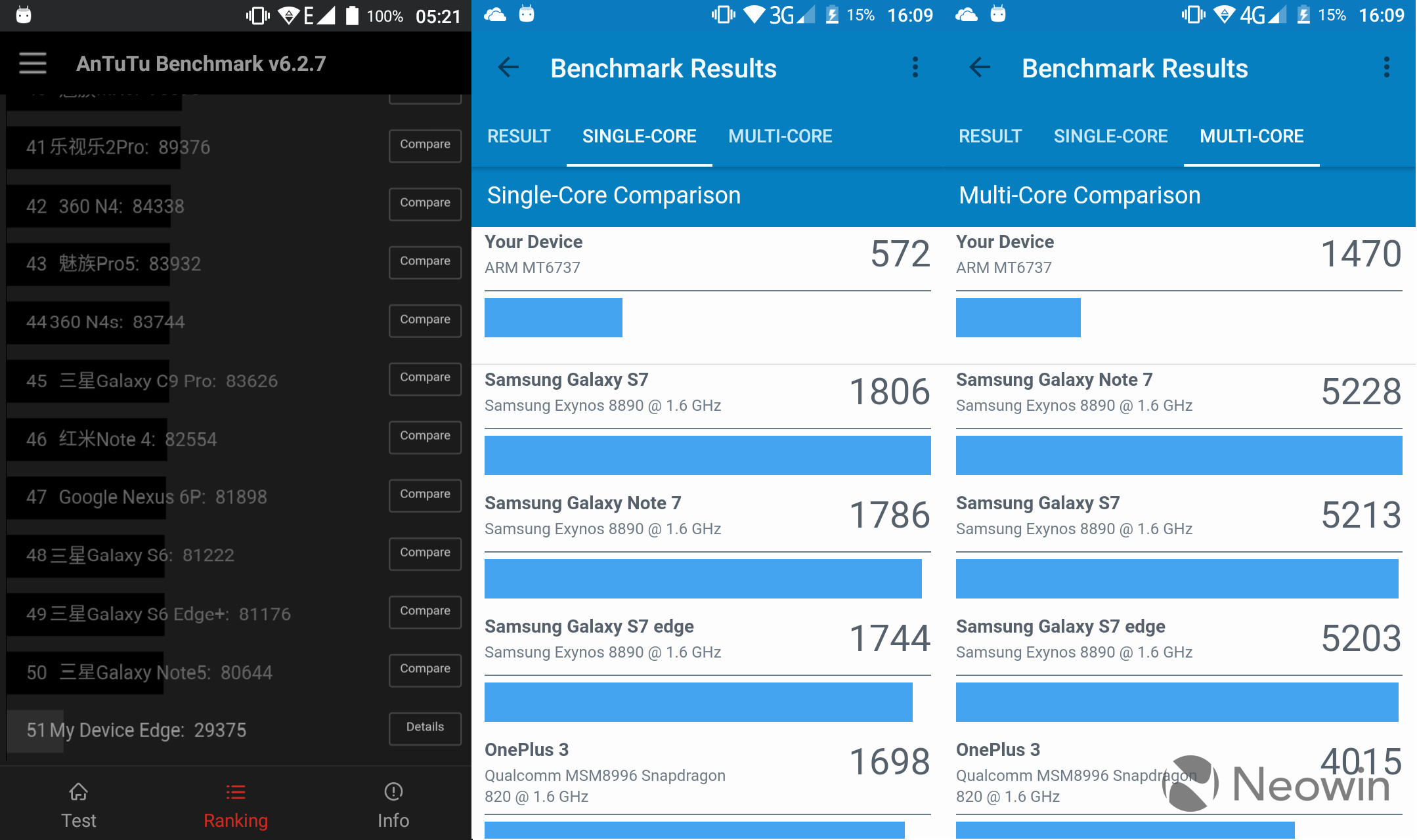 Using the smartphone for a long time, with multiple apps loaded in the memory, slowed it down to unusable levels and caused the device to become warm. It is rather interesting that the company took a jab at the exploding Galaxy Note7 last year, while its own device has such heat issues.

Moving between texting apps, Chrome and the occasional game, is more than what the Edge can do without getting bogged down. Often times, the load screens would stay up for longer if there were a few apps running in the background. I can safely say that the device isn't meant for heavy multitasking.

A 2,600 mAh battery is quite low in the Android world nowadays, but with some optimizations, manufacturers can make devices last through the day. Such is not the case with this smartphone though, as the Bluboo Edge needs to be charged at least two times in a day. In fact, I had to keep it hooked up to a charger while in office just to have it working on the way home. 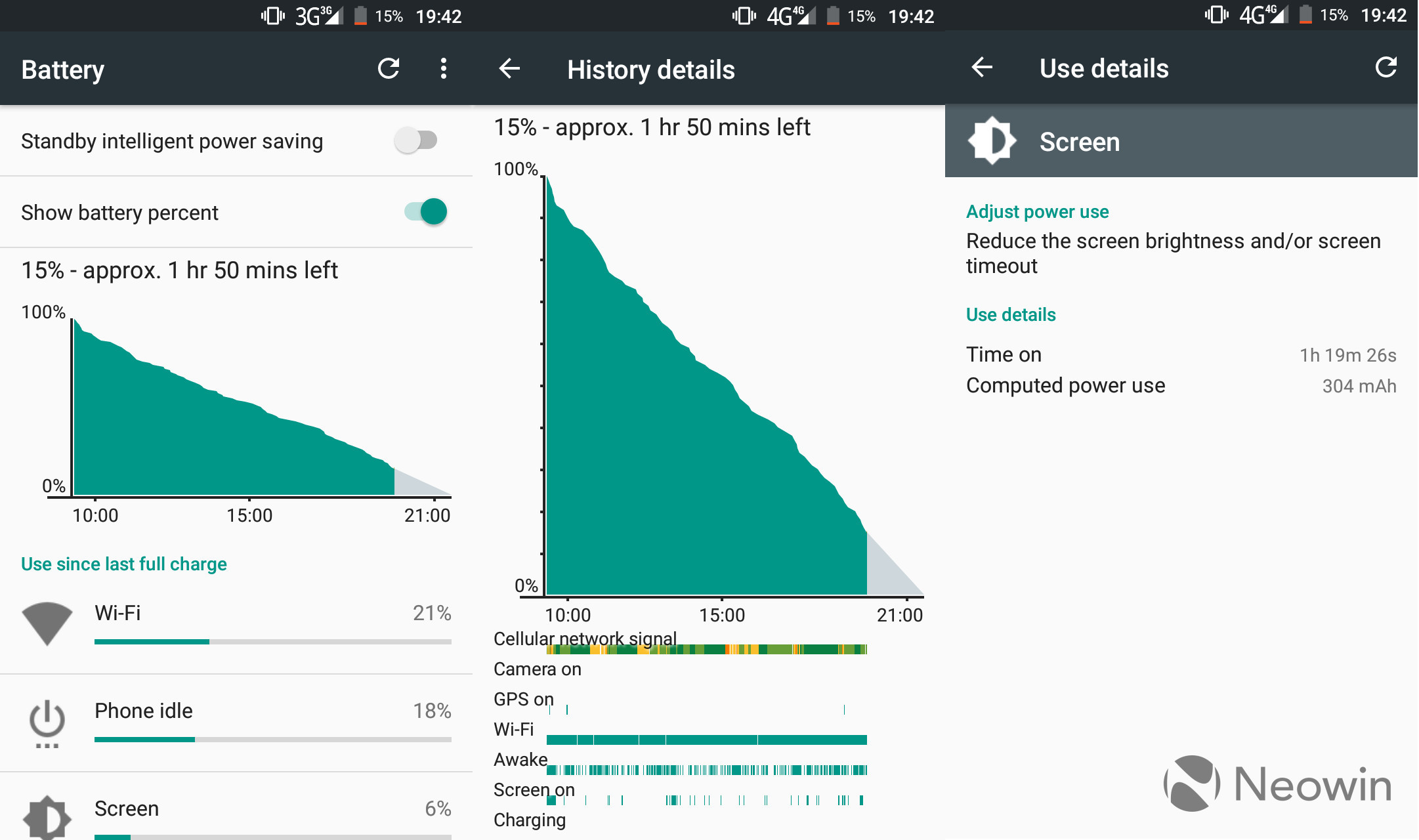 Using WhatsApp, Facebook, a bit of email, and few calls was enough for the device to lose most of its juice. Some of its battery drain was linked to the network reception issue, as it constantly switched between the 2G, 3G, and 4G networks when it could not grab onto the signal. Locking it down to EDGE, helped me get through a work day, but on 3G and 4G, it suffers the most.

The dated 28nm MediaTek chipset isn't power-efficient either, and the device's software issues also made things worse in the battery department. At this point, I think one can only use this device purely for calls and a little bit of social networking at best.

There is heavy competition in the lower end of the smartphone market, and the Bluboo Edge doesn't have enough things going on for it to stay relevant. The only positives offered by the device are its display and camera, which of course are good only in the context of this price range.

Its likeness to the Galaxy S7 edge could be something that might interest a few buyers, as the design has a nice feel to it and looks good. It would have been better if Bluboo had managed to ship the phone with better quality materials, though. The software issues and rogue ads are also major concerns with the device, that don't help the device's case.

My obvious recommendation in this price range would be the smaller Redmi 4A over this device, which is currently selling for almost the same price as the Bluboo Edge on Amazon. If it is available in your country, definitely go buy that. For others, the Moto G4 Play, which is a bit old now, still remains a good option. In the 5.5-inch screen size category, the Honor 5X or the Redmi Note 3 smartphones are pretty good for a slightly higher price and they offer better screens and cameras.

The review unit was supplied by Bluboo. If you would like to purchase the device, you can head here to purchase the smartphone which currently is priced at around $120 USD on AliExpress and $122.99 on TomTop. You can check out more information about other Bluboo products on their website.