Well would you look at that: for the first time in many, many years, Microsoft's Internet Explorer is not holding the crown for the browser used by most people worldwide. According to the latest stats by StatCounter for Week 20 of 2012, Google Chrome has managed to overtake IE by the smallest of margins as shown by the graph below. 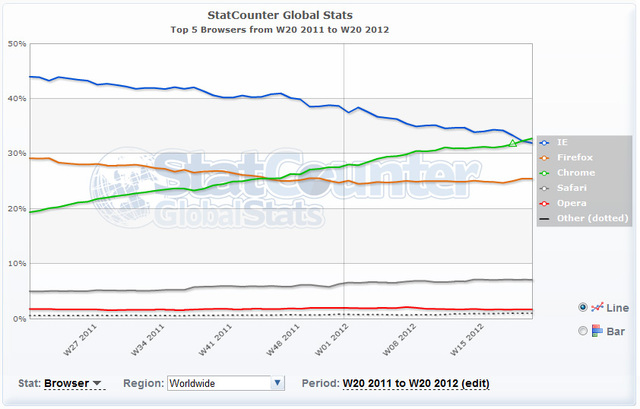 According to StatCounter, Chrome now commands 32.76% of the worldwide market, compared to 31.94% for Internet Explorer and 25.47% for Firefox. This places a browser other than Internet Explorer in the top position for the first time since (roughly) 1998, if Wikipedia's historical statistics are anything to go by; quite a momentous occasion for the Chrome team and the browser they launched under four years ago.

Of course when you stop looking at worldwide stats and start looking at individual regions, Internet Explorer has been losing out for some time. Firefox overtook IE in Europe back in late 2010, while Chrome overtook IE in Asia just a few months ago. IE still has the lead in North America (just) with 37.26% over Chrome with 25.86%, however things aren't looking so good for the fate of Microsoft's browser.

Here at Neowin, Chrome has been the browser of choice by our readers for some time, followed by Firefox, with Internet Explorer sitting around 22% when looking at the site statistics.