Consumer watchdog group 'Which?' is a well-known independent organization in the United Kingdom that informs the population on consumer rights and issues, and offers impartial advice on purchasing any number of products. Which? turned its attentions most recently to the UK tablet market, delivering its verdict on which one offers the fastest performance among ten of the country's most popular devices.

To assess a tablet’s speed, we use the industry-recognised Geekbench software. It puts tablets’ processors through their paces by seeing how quickly they can complete simulations of real-world tasks.

Their performance is then quantified to give a final numeric score – the bigger the score, the faster the tablet.

According to the Geekbench tests, Which? says, "the explosive Surface Pro 3 is 20% faster than any of its rivals, which include flagship tablets from the likes of Apple, Google and Amazon." The Surface Pro 3 that they tested was the lower-mid-range model, with an Intel Core i5 processor, 4GB of RAM and 128GB of storage. 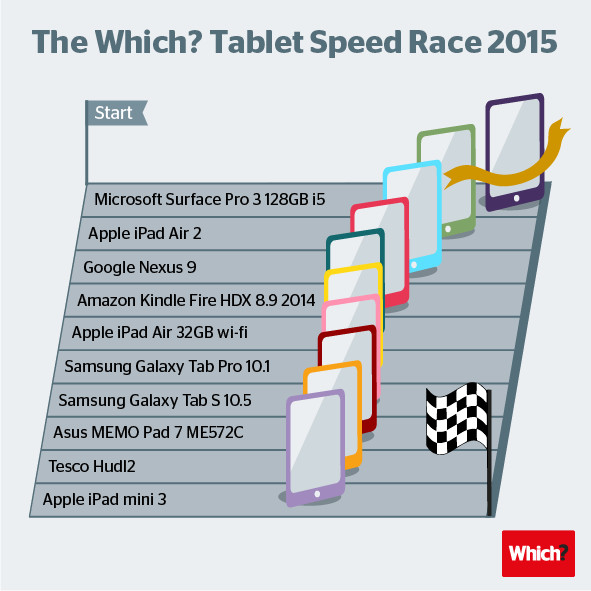 The actual breakdown of scores in the benchmark test was:

The iPad Air 2 - despite coming some way behind Microsoft's tablet - still beat the rest of its rivals in the test to second place, but things weren't quite so good for Apple's latest iPad mini.

The iPad mini 3, which costs between £319 and £479 GBP (around $495 to $740 USD) for the Wi-Fi model, was beaten by an 8.3-inch Android tablet that costs just £99 (around $150) - the Hudl2, from UK retail giant Tesco. Which? also points out that the iPad mini 3's performance in the test was three times slower than the Surface Pro 3 - although that seems like a bit of an odd comparison to highlight.

The consumer group also praises Google's Nexus 9 for coming in third place, as the best-performing Android tablet overall, and noted the quality of its high-res display and 8MP camera.

But it also makes the point that many of these devices - and others not on the list, of course - will handle most of the tasks that users will ask of them. After all, the buyer who's looking for an affordable 8-inch tablet isn't necessarily looking for PC-class performance; but a buyer who needs better multitasking and the ability to run demanding desktop applications may well be willing to spend more money on a higher-end machine like the Surface Pro 3.

As Which? itself points out, speed isn't everything.

You can check out a video overview of the results of the Which? tablet performance test below:

Source: Which? via The Telegraph