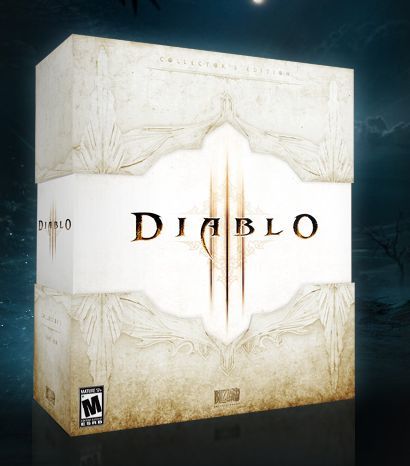 Gamers are still wondering when in the wild, wild world of sports will Diablo III will be released. Developer Blizzard claims they are in the home stretch of finishing the action-RPG sequel that was first announced over three years ago. However there is a hopeful sign that the game is getting closer to becoming a reality. During BlizzCon this weekend Blizzard announced plans to release a Collector's Edition of the game.

This version of the PC/Mac game will have lots more than the game itself. It will also have a lot of extras. One is a 4 GB Flash drive that will contain a free version of the last game in the series, Diablo II, along with its expansion pack. The Flash drive comes in the shape of a soulstone that can be put into an included base that looks like the Diablo skull. It's perfect for gamers who need something to show others how geeky .... er, dedicated they are to Blizzard's creations.

Other extras in the Collector's Edition include a two disk Blu-Ray/DVD set that goes behind the scenes of the game's creation (after all this development time it should be pretty extensive) along with a 200 page art book, the game's soundtrack on CD and some exclusive in-game content.

We do love collector's editions of games. While they are usually more expensive than the regular edition (and no, Blizzard has yet to announce a price for the Diablo III Collector's Edition) we usually are fans of all the extras that are crammed into the big boxes. The cool Flash drive and skull base alone is worth it to get this edition when it becomes available ... whenever that might be (seriously, we still have no real ideas when that will happen ... it's bumming us out).