It started out small and simple as a nice little stunt at CES 2012 in January. Microsoft, and one of its employees Ben Rudolph, got a number of people in Las Vegas to pit their iPhones or Android-based smartphones against a Windows Phone device. Microsoft set up small challenges to complete in the fastest time, such as looking up with a smartphone where a nearby restaurant is located or simply posting a Twitter message quickly.

The end result was that the "Smoked by Windows Phone" challenge during CES was a big hit on the Internet. Microsoft got a chance to show what its Windows Phone could do against iOS and Android devices in real world settings. The company and Rudolph even admitted when it lost a challenge and paid up the promised $100 to the winner. 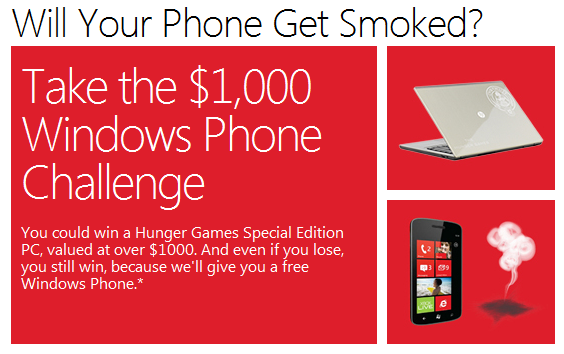 The final nail in the coffin happened a few days ago when Microsoft upped the stakes and decided to give away a HP ultrabook if a person could win the Smoked By Windows Phone challenge in one of its Microsoft Store locations. Suddenly this wasn't a quick and easy 100 bucks. This was a seriously valuable prize.

In hindsight, Microsoft should have known better. It should have realized that there would be lots of Internet and smartphone savvy people who would find a way to beat Windows Phone in order to get a free laptop worth over $1,000. In the end, that's exactly what happened.

The reports started coming in quick this week over Twitter accounts. One person, Sahas Katta, claimed he managed to beat a Windows Phone device with his Samsung Galaxy Nexus and Android 4.0 at his local Microsoft Store but was denied his prize. More reports of these kinds of incidents kept popping up on the Internet. One person, Atlanta college student Vivek Viswanathan, even threatened to take legal action against Microsoft after he said he won two separate challenges but was still denied his prize.

To be fair to Microsoft and to Rudolph, they have tried to make things right for at least some of the people who have claimed to have won the Smoked by Windows Phone challenge this week. But ultimately, this attempt to boost the marketing campaign with a free laptop (with a Hunger Games movie tie-in, no less) was an embarrassment all around.

Clearly, the reason is that Microsoft didn't prepare their retail store employees nor their store managers to handle what would have happened if a person won the smartphone challenge, even under Microsoft's rules and conditions. Instead, they left it up to the managers to be the final arbitrators of who won and who lost. That was a bad move.

Were some of the conditions and rules in Smoked by Windows Phone designed to perhaps keep things in Microsoft's favor? Sure, but there's nothing really wrong with that. It's like gambling. The house almost always wins and people should know that going in. The problems began when people won even under Microsoft's careful eye. Some of the managers at Microsoft's stores simply were not trained to handle that kind of event.

While Microsoft has decided to continue Smoked by Windows Phone at its store locations for the next few days, you can bet that the store managers and employees have been given a new set of rules and objectives. While it may still be hard to win the challenge, we hope that people who still manage to win are treated with more respect than some of the previous challenge winners.

In the end, Microsoft has turned Smoked by Windows Phone into an enterprise that is now tarnished a bit by scandal and cries of fraud. It's a shame because the Windows Phone division really needs something to make it stand out against the iOS and Android crowd. Hopefully, Microsoft has learned some lessons and won't make this kind of mistake again as it moves forward.