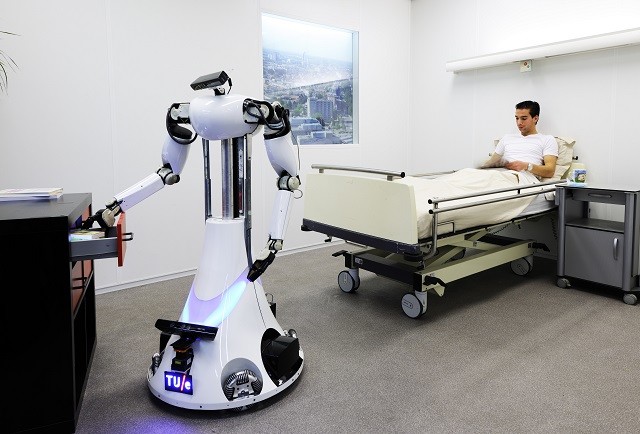 Are you by any chance scared of the eventual uprising of the machines and future enslavement and annihilation of all humankind? Good, cause the EU seems poised to see that future happen. At least that’s what some folks think when they look at European funded research into developing a world wide web for robots.

The BBC is reporting that researchers from five universities along with folks working at Philips have been developing Skynet RoboEarth, which can easily be described at a robot’s version of the web. Through it, connected robots can share information and learn from each other which would make them more versatile and useful in real-world scenarios. Rene van de Molengraft, the RoboEarth project leader said:

The problem right now is that robots are often developed specifically for one task. Everyday changes that happen all the time in our environment make all the programmed actions unusable.

Scientists behind the RoboEarth project hope this will transform robotics and finally bring us the future that science-fiction has promised.

Besides being a network in which data is shared between machines, RoboEarth will also work as a hive mind thanks to cloud computing. The idea is that heavy computation can be offloaded to the cloud so our robots won’t actually do any of the heavy lifting, which will reduce the need for power-hungry CPUs.

The project will face its first major test soon when four robots will have to undergo a trial in a mock hospital room, at the University of Eindhoven. Each robot will handle a different task, while sharing data with the others with the final aim of bringing a glass of water to a mock patient.

This doesn't sound too impressive, but if it works properly it may show the feasibility of the project and the potential of a scaled-up version. Best case scenario envisaged by the scientists is that in 10 years’ time robot assistants will become commonplace.

Worst case scenario envisaged by all of us is well… let’s just say that we humbly welcome our new robot overlords.