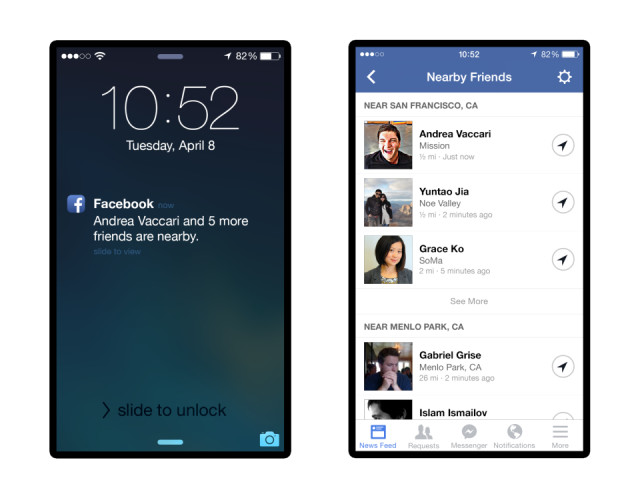 Recently, Facebook has been on a roll with the purchase of Oculus Rift, adding free Wi-Fi calling to Messenger, and its plans to remove chat in favor of Messenger. Over the next couple of weeks, Facebook will start rolling out a new feature, Nearby Friends, which allows users to broadcast their current location to friends nearby. While it’s currently possible to share a location, this method doesn’t allow Facebook users to organically share their location with nearby friends or show their precise location for possible meetings.

Nearby Friends changes this by letting users share their location, which will automatically notify friends if they are in the same surrounding area. The new feature is optional and can be turned on and off. Facebook has also embedded privacy features by allowing the broadcast to only reach friends, close friends, or a specific list of friends. Nearby Friends will also only work if friends have this option enabled and are sharing their location with each other. Nearby Friends users will also have the option to show a more precise location to particular friends. This can be set for a specific time period and will allow friends to locate you for a casual meeting or rendezvous.

While this new feature has pushed the boundary of privacy a bit further, applications like 'Cloak', are pushing the opposite by providing users with controlled anonymity.

Nearby Friends will be available on iOS and Android within the next couple week in the United States. There is not word yet on a global release.