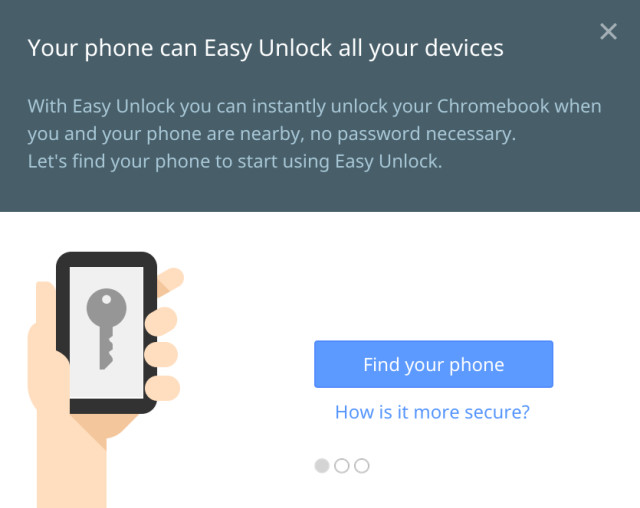 Chrome OS is expected to get an "Easy Unlock" feature as Google has rolled out an early test version in the developer preview of the portable operating system.

The currently non-functional feature, which was spotted by Android Police in one of the latest developer builds of the Chrome OS, will allow users to unlock their devices such as the Chromebook by simply placing their smartphone nearby. As the picture suggests, there is no need for a password so we can expect the feature to use a wireless connection and geo-location data from the paired smartphone to unlock the device in proximity.

In its current state, "Easy Unlock" is disabled by default, however, enabling it does nothing more than showing a pop-up notification at startup to use the smartphone for unlocking. While there is no way to setup the functionality at the moment, Android Police believes that a companion Android app may be in development stages to complete the feature.

Google has tried out different ways for unlocking Android smartphones such as pattern and face unlock but has relied on standard password based lockscreen for the Chrome operating system. It will be interesting to see how the "Easy Unlock" feature works out as other methods have had their share of loopholes.