There is a saying that all PR is good PR, but a recent development may have pushed that statement beyond its limits. If you have been watching the news lately, you will surely have seen the tragedy in South Korea in which the ferry Sewol capsized and sank, with 30 people so far confirmed dead and over 260 still missing. Most of those onboard the vessel - and indeed most of those still missing - were high-school students.

The disaster has saddened people across the globe, and especially so in South Korea itself. So, if you are the folks who work at Microsoft in South Korea, what should you do? Perhaps extend an Office marketing promotion in memory of the tragedy? Perhaps not - surely that would be too crass. 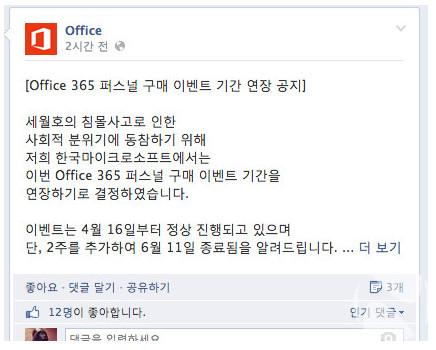 The Facebook post was quickly pulled from their page as the company's South Korean followers lashed out against its tasteless and insensitive nature. Naturally, trying to use a tragedy such as this for marketing efforts is never going to sit well with the general public.

Microsoft isn't the only company whose lack of sensitivity has been in the public spotlight lately. It was recently revealed that Samsung wanted to take advantage of the death of Steve Jobs as the turning point for its Galaxy marketing efforts.

Thanks for the image anon!