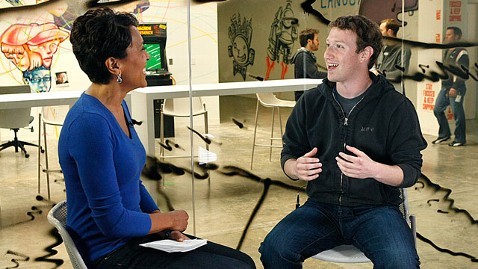 Tomorrow, Facebook CEO Mark Zuckerberg and COO Sheryl Sandberg will take to ABC's Good Morning America and World News with Diane Sawyer to reveal a new tool on the social networking site which "has the power to save lives," according to a press release from ABC. Yes, you read that right: the tool is being touted as something that could literally save lives.

According to the ABC press release, Zuckerberg and Sandberg will be conducting separate interviews tomorrow with Robin Roberts and Diane Sawyer, respectively. Zuckerberg's interview will appear on ABC's Good Morning America, which airs from 7 to 9 a.m. ET, where Zuckerberg will reveal the new tool. Sandberg will then conduct a follow-up interview on World News with Diane Sawyer, which will air at 6:30 p.m. ET. Sangberg's interview will discuss "the personal stories that led to this new initiative and its goals," according to the press release. Oddly, Facebook has not released a statement regarding the interviews on the company's Newsroom page, which provides information and press releases for the social network's latest announcements.

Parts of the interviews will also appear on other ABC outlets, including the network's Nightline news program, ABCNews.com and ABC News Radio. Facebook's last major announcement regarding a new site feature was the addition of the Timeline feature for user accounts. The company is planning an initial public offering which will likely take place in mid-June.