For those of you who have previously owned a Zune or a Zune HD, you'll get what the buzz has been about over the past few years since the first Zune device hit the streets. Zune has always, at least in my mind, been a great music player. When it first came out I remember finding both the sound quality and the interface to be better than than that of an iOS device.

Now, with the release of Microsoft's mobile platform, we have Zune fully integrated into Windows Phone 7 devices and although not too much has changed since the Zune HD was released, this is still a very impressive part of the operating system. Nearly everything you came to expect from the Zune HD is here; from music to videos. 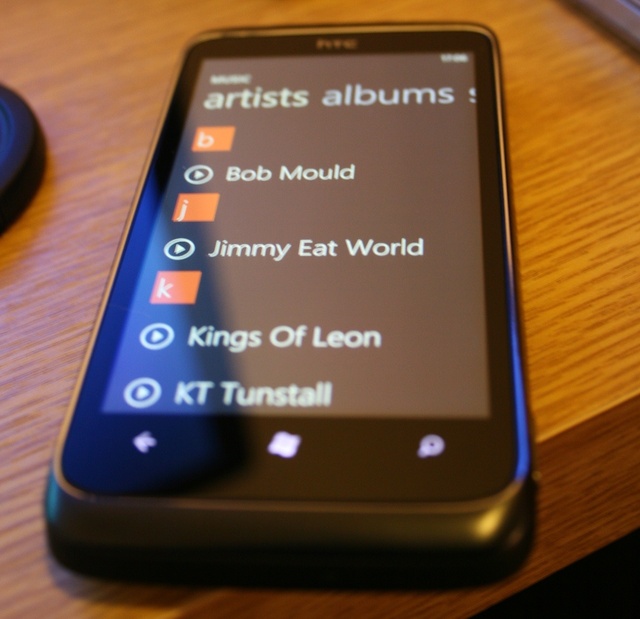 "Music and Videos" on Windows Phone 7 is where all your access to Zune features comes into play. From here you get Music, Videos, Podcasts, Radio and direct access to the music section of the Marketplace. The Music and Video hub also keep track of your YouTube history and are easily accessible by a quick swipe to the right of the screen.

The music link does exactly what you expect it would. The link takes you to the main music section, which contains artists, albums, songs, playlists and genres. Tapping on an artist brings up the albums or songs that you already have downloaded, and includes other details such as the titles and the album/song artwork.  On the same screen, there is a handy link to the marketplace where you can view all the other albums available. The great thing here, is that unlike other phones, the marketplace link loads everything within your artists page rather than loading up a seperate hub or application. Clicking on the marketplace link brings up all of the artists albums that are available to stream or buy, but keeps you on the artist’s album section. I have to say I really liked this, it is simple and it keeps everything in one area without bringing you out into the main marketplace. 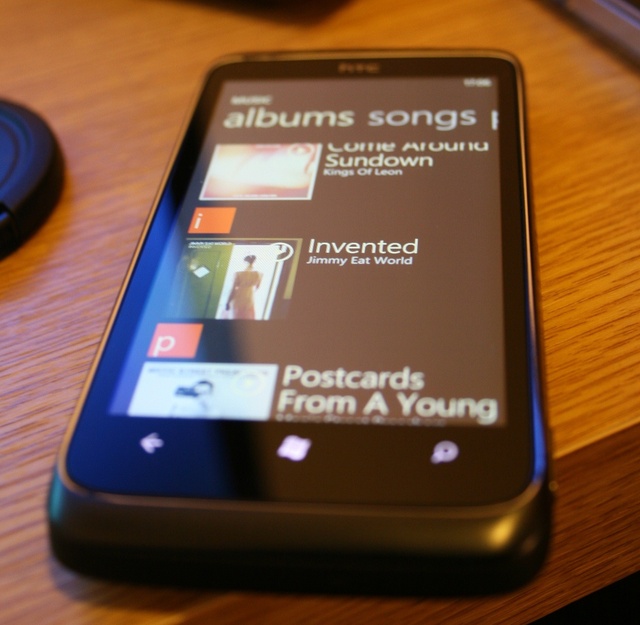 Playing an album simply requires clicking on the small play icon with-in the album artwork. This then brings up a great looking screen showing a profile picture of the artist in the background, with the smaller artwork on the main part of the screen. Below that you get the name of the song and the upcoming songs. Finally, you have the skip backwards, forwards and play/pause buttons. You can also use your finger to slide left or right to change tracks too. If you wish to get a full listing of the tracks, go back to the main album page and then click on the album’s title.

Using the volume controls on the right of the device also displays the skip, rewind and pause buttons for music. Users are also able to access these controls by pressing the power button when the screen has dimmed. 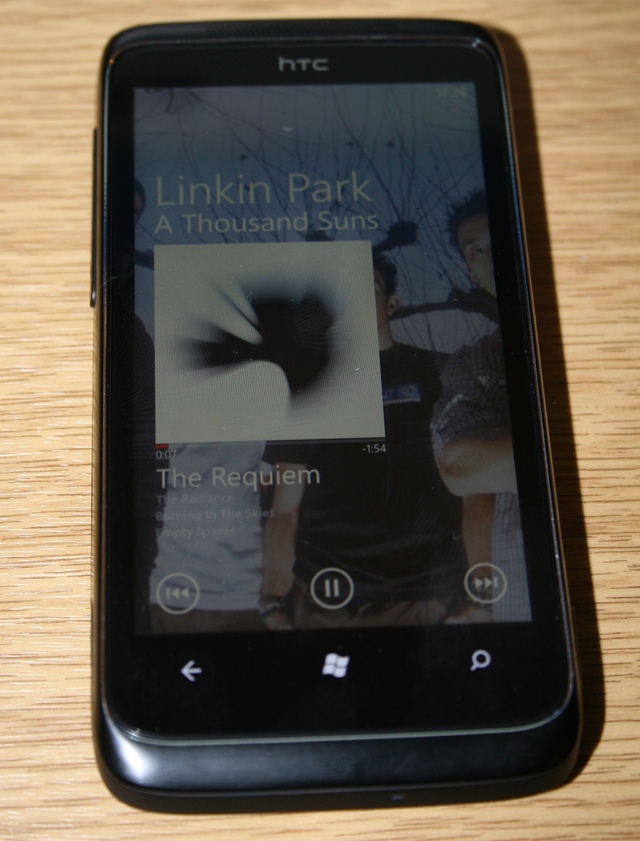 The best feature that many people are still wary of is Zune Pass. By paying a monthly subscription you can stream and download as much music as you want through the Zune marketplace, but even better is that you can also stream the songs directly from your phone and they sound great. One problem right now is that the service differs from place to place, Americans are allowed to keep 10 downloaded tracks a month, yet here in the UK for the same price you don't get to retain any and I still like to actually own my music. Don't get me wrong though, this is a great service if you really must have loads of different music each month.

Next we have the videos section. From here you can watch videos placed on your Windows Phone device, check out television programmes, music videos and rented or bought films. Buying and renting is done through the Zune software for Windows. It's pretty easy to use and content is offered in high quality. I'm still not sold on buying films or TV programs through an online service just yet, but I have done so just this once for this focus.

General picture quality is great and playback works well, especially if you have got a good Windows Phone 7 device with a nice big screen. Everything is clear and when playing back 720p content, it looks fantastic. Tapping the screen during playback brings up the quick controls. The codecs that Zune supports in Windows Phone 7 have also improved with better support for many of the formats that everyone use. 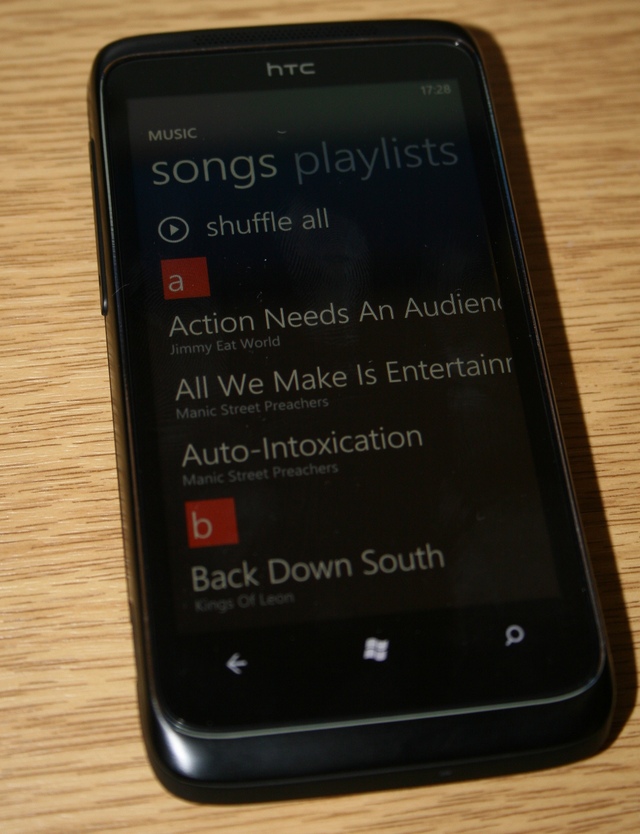 Podcasts are just as you would expect them to be, although I would have liked the option to stream them, you can download them via the Zune application on Windows and then transfer them directly to your device.

Finally, we have radio. In the UK (and I believe elsewhere) all that is available is plain FM radio, like many other phones out there. The sound quality depends on the headphone reception, and seems to work best with the ones that HTC provided in the box with my review unit, the HTC Trophy. It's a good feature but it is one that I can personally live without, though I do know of many people who still use their phones for listening to the radio, but with the emergence of DAB and HD radio, the FM based quality is showing its age and it is fiddly to get to stations.

The sound quality here is also excellent with much a wider stereo field and deeper low end than many other media devices on the market, whether this is more due to the way HTC configured the Trophy I don't know, but it sounds better than my iPhone does with music and video and that is a very good thing. The HTC Trophy also ships with sound enhancements options, some of which work much better than others (I'm looking at you Dolby).

Overall the Zune section on Windows Phone 7 is almost perfect. It does have a few minor annoyances such as some backgrounds that make things hard to read at times, but if you have a Zune Pass you are in for a treat with great Wi-Fi streaming and loads of music to choose from.  If Microsoft can come up with an easier way to switch and also pause tracks then they have my vote for a winner here.

This post is part of a week long series featuring Windows Phone 7 called "7 days of Windows Phone 7", and is a deeper look into Microsoft's much anticipated re-launch into the smart phone market. Check back later this week for parts 2 & 3 in this series.