With the launch of Windows Phone 7, there have been some notable features missing, including copy & paste, as well as the ability to multi-task, but one of the lesser known, is that with the RTM release of Windows Phone 7, it's impossible to set your own custom ringtone, and you're forced to use the built in ones.

Microsoft has remained tight lipped, but an eagle eyed user on xda-developers called Naplesbill spotted a page on Microsoft's support website that shows off how to get a ringtone, according to Windows Roundup. The page, (which we bet will be gone in no time) details a process that actually doesn't work yet, which means an update must be in the works soon. 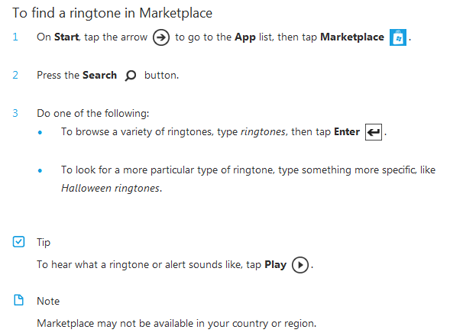 According to Windows Roundup, another user on XDA developers found "undocumented capabilities" that line up with this, and says that the capabilities "could enable apps to interact with the ringtone library" but notes that even if you attempt to use these right now, the phone will not run the application. Users are posting that they think this will allow applications to add sounds to the ringtone library.

Many users have been complaining about the lack of ability to change the ringtone to their own sound, so this news is great. Hopefully we'll be hearing from Microsoft in the coming weeks about the update being pushed to Windows Phone devices. Here's hoping copy & paste is included too.