The long awaited, and hoped for phone from Sony may exist after all. With some details leaking out of the Sony vault and some clever sleuthing, a PlayStation Phone is beginning to look quite real. 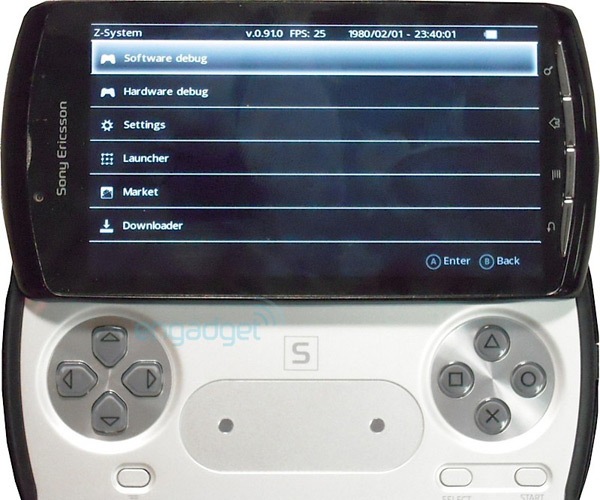 Technology blog Engadget decided to risk their credibility by posting some pictures of the phone and now can breathe a sigh of relief as more details come out, further making this a solid claim. PlayStation Phone will be Android-based, although it is unknown yet what version the phone will contain. The phone will also feature a custom Sony Marketplace for purchasing games. Innards of the phone will sport a 1GHz Qualcomm MSM8655 chip, 512MB of RAM and 1GB of ROM. The screen appears to be between 3.7 to 4.1 inches, the apparent golden size for handheld and portable gaming.

PlayStation Phone, or by the suspected name "Z-System," will sport a multi-touch pad, which is the semi-indented gray area in the image above between the D-pad and square, triangle, circle, x buttons. The name "Z-System" comes from multiple sources, all supporting the information. The code name of this device is Zeus, an image of the device is labeled "Z-System" up top, Sony holds trademarks for "Z-System", and z-system.com is registered by Sony Ericsson. It is not clear yet though if devices will have set standards to become part of the "Z-System," or if perhaps it is just the branding that will be used.

The firmware, while Android-based will be custom made for this device, which can be seen already in an early stage in the posted images. An interesting side note, Sony has abandoned Memory Stick for microSD with this phone, a move that is sure to help standardize the mobile market rather than keep up with separate technologies for the same purpose. Release date, or even an official unveiling of the device officially are unknown, however this is looking like it will shape up to be a 2011 device with some hopefuls looking to holiday 2010.