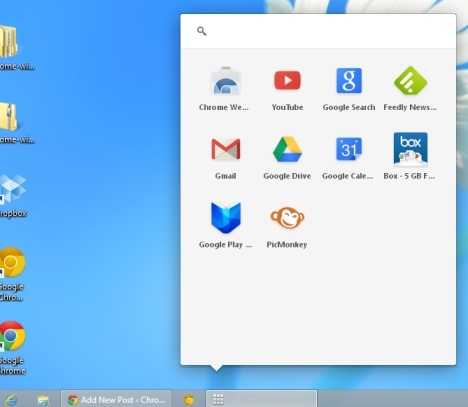 If you like Chrome's Web Apps or the Chrome OS App Menu and you're using Windows, you could be in luck. Google is working to bring the App Menu to the Windows taskbar and that's probably not entirely coincidental, now that Microsoft has removed the traditional start menu from the recently launched Windows 8.

You can check out either the latest Chromium build or Google Chrome Canary if you're willing to try out the first implementation of the new feature. To enable it, go to chrome://flags where you can find more experimental tweaks and features and look for 'Show Chrome Apps Launcher'. A shortcut will be pinned on the taskbar when enabled and removed when the flag is turned off. The menu stays pinned after closing Chrome. Beside the direct access to Chrome's Web Apps, you'll also get a search bar on top of the menu to search the web.

There are still some bugs though, because sometimes a new Chrome window opens instead of the menu. That's probably why the feature is still hidden and only available in Chromium and the Canary release. The App Menu also works on Windows 8.