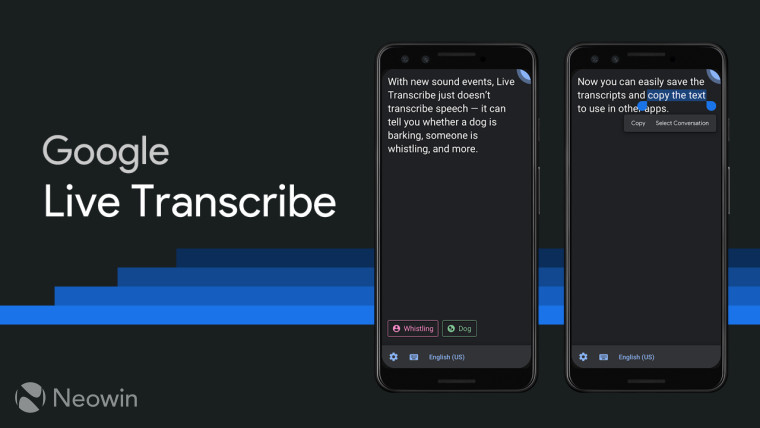 Google announced an accessibility-focused app for those with hearing disabilities called Live Transcribe back in February. As the name suggests, Live Transcribe helps users view a real-time transcription of speech on their device, a feature that is nifty for those with hearing impairments or those that are hard of hearing. The app also lets users type-back responses through the device, in cases where the user cannot talk or does not wish to. Today, the search giant announced an update to the app that is coming next month, which brings with it a new sound event recognition feature.

Sound events that are not part of spoken words, such as that of animals, doorbells and other instances will be picked up by the app to be notified to the user. This is especially useful for users that do not have visual cues of events that occur in the background. Sounds that are recognized are notified in the app at the bottom of the page, away from the transcripts, so as to also supplement the transcriptions.

In addition to enabling the ability to recognize sound events, the firm is also adding the ability to copy and save transcripts. This feature not only helps users with hearing ailments but also those that rely on transcribing spoken language – such as students that take notes or journalists that need to transcribe interviews. The transcripts can simply be tapped and copied partially or entirely and pasted where needed. The audio visualization indicator at the top right too has been increased in size.

Live Transcribe, along with the recently announced Live Caption and Live Relay features will greatly benefit those with hearing ailments and impairment. However, it is to be noted that the app is still listed as ‘Unreleased’, as the company is rolling it out in stages, and may not be available to all users for download yet. You can, however, head to the Play Store to check if the app is available in your region. Though no specific dates were announced, the update to Live Transcribe with the said features should be live sometime next month.