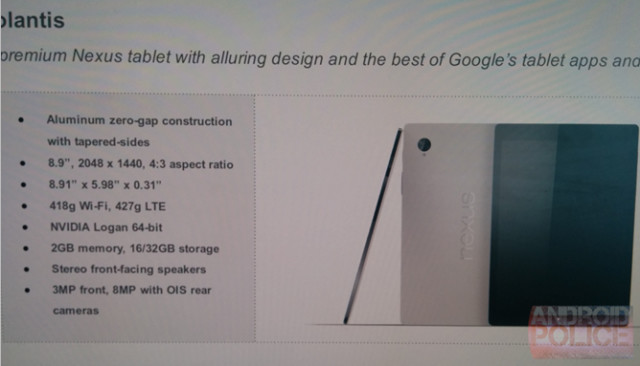 Next week, Google will host its I/O conference where it will likely unveil many new Android based products and software, with one of them being the Nexus 9. For those who do not know, Nexus is the brand name that Google uses for hardware that it sells directly to the consumer. Because Google sells it directly, there is no middle-man in the way for software updates, so if you are looking for a device that will receive software updates first, the Nexus line of products are for you.

Android Police was able to get the scoop on the device that is referred to as 'Volantis' and is built by HTC. You can see in the image that the device, based on its specs, is quite slim at .31 inches. Seeing that it will be built out of aluminum, weigh 418g and come with all the expected sensors and chips, this device looks like it could be the best 8in Android tablet on the market.

The 2048x1440 display will come in at 281 PPI, which means that it should offer up a fantastic viewing experience. Toss in the NVIDIA's latest chips, 2GB of RAM, and LTE, and we think this makes for one complete and compact tablet. The device is expected to be called the 'Nexus 9' as that is how it is referred to internally at Google.

Google's I/O conference is next week and we expect to see this device shown off on stage.