Microsoft employees have had a rough time in the last few years, Vista wasn’t the success they’d hoped for, Windows 7 was, KIN flopped, and so on. It’s a rollercoaster ride, and probably quite frustrating for those softies that want to see Microsoft succeed. CNNMoney.com reports that an ongoing survey of over 1,000 Microsoft employees shows that many recent failures may be being blamed internally on Microsoft’s CEO. In the survey, only half of the respondents believed that Ballmer’s performance was satisfactory. 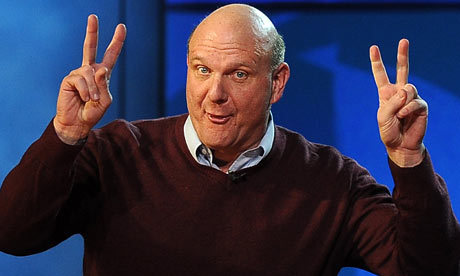 The mobile space has been particularly troublesome for Microsoft in recent years, with Apple and Google both taking Microsoft on with well designed and marketed products. Apple in particular has all but changed the mobile computing landscape with the iPad, a market that Microsoft had previously tried to create with its Tablet PC and Origami projects. As a Microsoft employee, the lack of response from the software giant (including the cancellation of Courier) must be frustrating. Add those issues to the departure of Bach and Allard, and you can quickly see where why that frustration may be blamed on Ballmer.

With stocks underperforming, and falling confidence, Microsoft has revealed that it will not be paying Ballmer his maximum bonus this year. Could it be time for a leadership change? There were some crazy rumors in 2006 that Bill Clinton could be the next CEO. What do you think? Is it time for Ballmer to leave, and if so, who should replace him?

Thanks to Hum for posting this in the Neowin forums.