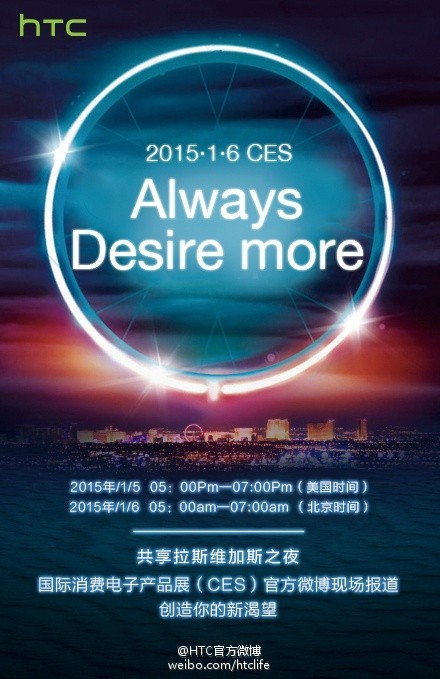 HTC, the company that was once the leader in Android smartphone shipments, has had a hard time keeping up the pace for the last three years, with sales continuing to decline. Still, the company is still fighting its way forward, after encouraging results with the HTC One M8, and various low-mid range devices like the HTC Desire 510, HTC Desire 610, and the recent mid-range flagship – the HTC Desire 820.

With 2014 drawing to a close, we have seen recent leaks of a possible new flagship - dubbed HTC Hima, but we also know that could be delayed due to issues with Qualcomm Snapdragon 810 chipsets overheating. HTC may have given up on its smartwatch efforts, so there’s no clear future for the company’s wearable plans.

Moving forward, the Taiwanese company wants to gather steam with a strategy of focusing on budget-oriented phones for 2015, and one or more may be unveiled at CES in January. The company has posted a teaser photo on their Weibo account that has the following tagline: “Always desire more”.

While this is not a direct confirmation, it does ask the question if there’s a chance that the leaked HTC Desire A52 – a budget selfie phone, may be revealed at the show. The phone is reportedly equipped with a 13 megapixel front camera, up to 32GB of storage, and dual SIM. With CES around the corner, we won’t have to wait very long to see what HTC has got up its sleeve.