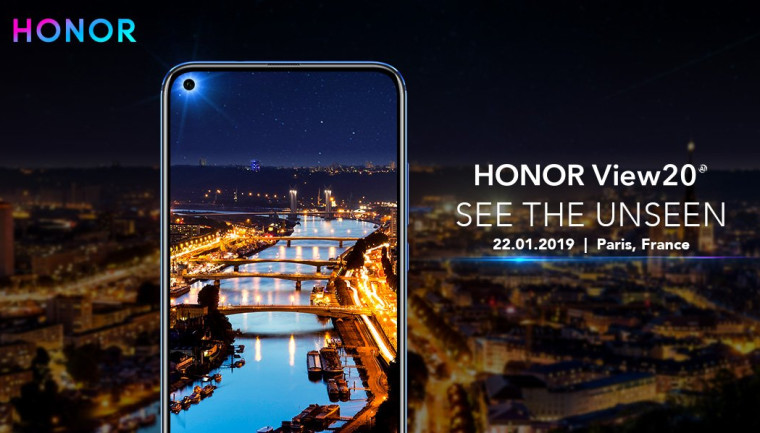 Last week the Honor View 20 was announced by Honor's parent company, Huawei. Although the company revealed technical details sparingly, they did highlight some of the unique features this model will possess, most of which pertain to the display and camera tech. Further information and specifications of the device will be unveiled at the official launch, which will take place in Paris, France on January 22.

According to a report by Droid Shout citing an anonymous source, pricing in Europe for the Honor View 20 will supposedly be between €549 and €569 for the 6GB RAM version, with 128GB of internal storage and in the color Phantom Blue. As for the 8GB variant equipped with 265GB internally, the price ranges between €649 and €699. The second version will be available in two colors, Black and Sapphire Blue.

These are the general prices to be expected by customers situated in Europe, however, prices will vary further depending on the country within the region. Apparently, to further sweeten the deal Huawei will be bundling the Honor Magic Watch (worth €179 when sold separately) with every purchase. It is unclear from the report whether there will be a quota or limit on this promotion.

Other noteworthy features of the View 20 include a 48MP main camera, 25MP selfie cam, and display measuring 6.4-inch with a resolution of 1080p. The smartphone boasts a distinguished cut-out punch hole in the screen for the front camera. It will also have AI-related features, made possible due to the Kirin 980 chipset, which is equipped with a dual Neural Processing Unit. The handset will start selling globally on January 22, however, it is already available for purchase in China.