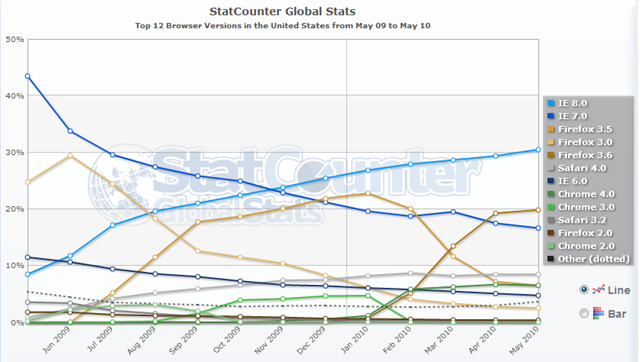 Over the last year, IE6 marketshare has fallen by 6% in the US, from 11.47% to 4.74%.  Back in March, Neowin reported that a funeral was held for IE6 where Microsoft even sent flowers when official support for the browser was dropped.

Unlike Firefox, Internet Explorer shows a steady decline in older browsers and a steady adoption rate with new versions.  Firefox on the other hand, shows a vast leap when a new version is release, with Firefox 3.6 gaining 19.85% marketshare in as little as five months.

Microsoft is attempting to push businesses and users to upgrade from IE6 and IE7 to IE8, which contains all the latest security patches.  IE7 still holds 16.64% market share, just below Firefox 3.6 with 19.85%, while IE8 takes the top spot with 30.49%.

Microsoft plans to release the next version of the browser, Internet Explorer 9, and it will only be available for Windows Vista SP2 and Windows 7, cutting support for Windows XP.  Windows XP still holds strong on the top spot with 42.32% market share in the US, Windows Vista and 7 both come in second and third place with 26.44% and 16.87%.