Google may be going to shut down its Google Reader RSS service on July 1st, but other RSS reader companies are reporting a massive surge of new customers, which shows that the feature is still in demand among Internet users. One of those companies is Feedly, which announced that it added a whopping 500,000 new users in the first 48 hours after Google revealed it would be closing Google Reader.

Neowin got Feedly's Cyril Moutran, the head of its product and strategy, to answer our questions about the company's current and future history, including Feedly's plans to offer Windows 8 and Windows Phone apps at some point.

First, for the people who might not be familiar with Feedly, can you give us a background on the company's history?

Feedly was founded in 2008. We are a small team of 10 serial entrepreneurs. We are passionate about design and building innovative products. As more and more devices surround us in our daily live, we saw a great opportunity to rethink how to best access the wonderful content of the web across all these devices.

The RSS feed is still a part of most websites, yet there seems to be an attitude that with the rise of Twitter and Facebook it is old fashioned. How does Feedly respond to that kind of attitude?

We believe there is still a great need for Open Feeds like RSS and Atom. With Feedly, and other mobile readers, there is a whole new set of applications that are making feed reading accessible to a larger set of internet users. Content does not start on Twitter, Facebook or Pinterest. Feedly users are usually curious people who are selective about what and when they want to consume information. They are designers, writers, teachers, researchers, developers, moms, students busily feeding their minds, connecting dots and sparking new conversations. Open Feeds (like RSS/Atom) are their sources of content. They are the users who share the best content on Twitter, Facebook, Pinterest, and other social networks.

Open feeds, like RSS and Atom, allow for a lot more personalization than Twitter or Facebook do. For instance if you want to track specific auctions on eBay, new apartment listing on Craigslist, specific coupons no RetailMeNot, each user has different filtering needs. This is not something you can do on Twitter, Facebook or Pinterest. Also, web feeds allow for very rich content, and very niche topics. For example if you are a baker, or interested in making your own bread, you have wonderful sites like https://tartine-bread.blogspot.com, this is not the type of content you will find on Twitter, Facebook, Pinterest, and only very partial links would be shared on the social networks.

Can you give us an idea of how many people downloaded your mobile apps and your web plug ins and how many new customers has Feedly signed up since the Google Reader announcement?

What can you tell us about your plans to create a Google Reader type of service for Feedly, Normandy?

A lot of Feedly's early adopters were Google Reader users. Among our users we have many professionals that read feeds to keep up to date with the latest news in their industry, learn new skills, or get inspired for projects they are working on. Google Reader was the tool early adopters were using for that, even long before Feedly, Twitter, Facebook and Pinterest came into the picture. Over the past year, It seemed obvious that Google started to shift resources away from Reader, and was not improving the product anymore. We saw that as a great opportunity. About 6 months ago, we started on an ambitious project of building Normandy, a whole backend that could replace Google Reader as a platform for content centric applications. 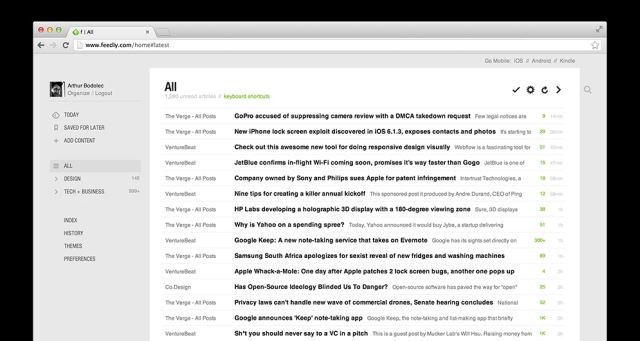 Do you have any plans to launch mobile apps for Windows 8/RT, Windows Phone 8 and/or BlackBerry 10 at some point?

All three have been requested by users, and are in our plans.

There are quite a few RSS services and apps out there. What makes Feedly stand out from the rest?

Feedly stands out by its acclaimed designed, its ability to process truly any feed on the web, and to sync reading across devices.

Can you give us any hints about what else Feedly has in the works?

Next is a major update of Feedly mobile (both iOS and Android). Stay tuned :-)

Finally, is there anything else you wish to say about Feedly and its future?

We do intend to offer a Premium version of Feedly. We are not quite ready to announce the details behind the Feedly pro version, but very soon. We have had a lot of requests from our users, who want us to have a Pro version. It is not specifically about any feature, but more about the fact that they see Feedly as a key app in their daily routines, and as they are ready to pay for Dropbox and Evernote, they would be willing to be paying for Feedly as it is today. The monetization model goes beyond a pro version. At Feedly we believe in the future of open feeds like RSS and Atom. With Open Feeds, as opposed to Twitter, Facebook or Pinterest, content lives distributed on the web, can be highly personalized and anyone can participate. But one of the main problem of RSS and Atom have been the lack of support for monetization, for both publishers, and developers of content centric applications. Feedly intends to lead in that space with Normandy, and offer support for premium content feeds.

We would like to thank Mr. Moutran for answering our questions!