Analysts are impressed with the iPad 2’s initial sales performance. According to Reuters, Wedbush Securities analyst Scott Sutherland expects to see one million reported sales in the first weekend. Apple products have typically very strong starts, and the second incarnation of the iPad is no different. In fact, the one million mark is significantly better than iPad 1 sales in its opening weekend last April. Analysts estimated that between 350,000 and 400,000 units were sold then. It’s possible, according to Global Equities Research analyst Trip Chowdhry, that Apple may have sold three times as much in its opening weekend than it did previously.

Not everyone is as optimistic. Securities firm Piper Jaffray is estimating a more conservative 400,000 to 500,000, and they interviewed consumers in New York and Minneapolis Apple retailers. Their results show that nearly all iPads were sold out on the first day, 70% of buyers are first-time iPad owners, and that there was an even split between Apple users and PC users.

The 70% new users result is great sign for Apple. It shows that the company is branching out past its typical loyal base. Every successful public launch event increases Apple’s reach, and the iPad 2 is no exception. While news of the successful launch has been drowned out over the weekend by global crises like the natural disasters and recovery in Japan, this launch is one of the most successful in Apple’s history, and ups the ante in an increasingly volatile tablet battlefield. The full Piper Jaffray survey results are below. 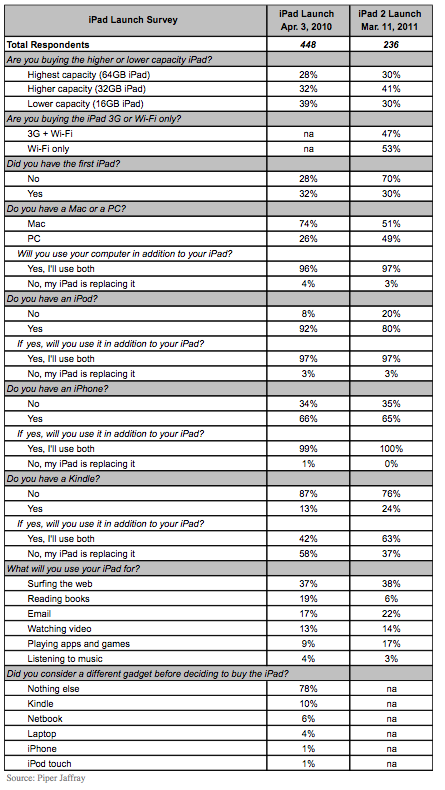