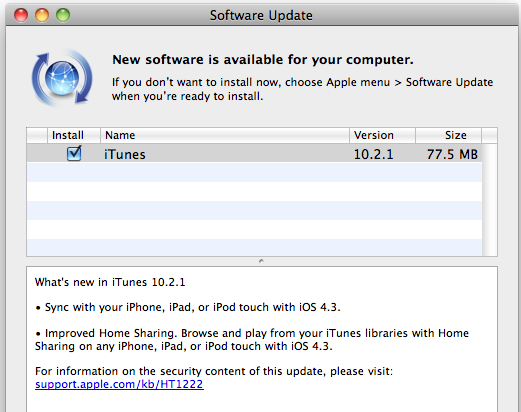 Apple has just released the latest version of iTunes 10, which replaces the previous version that was only launched on Wednesday.

The latest version of the software, iTunes 10.2.1, has the same update change log as the previous 10.2 version. It's unclear exactly what has changed since Wednesday, but it's likely a simple bug fix that prevented iOS 4.3 from installing correctly.

Earlier today, BGR reported that Apple would be releasing iOS 4.3 at 10am PST / 1PM EST, but shortly after the launch window passed, loopinsight.com reported that the update will be made available tomorrow. The delay was likely due to an iTunes issue, possibly why Apple has released a minor update for both Mac and Windows.

For information on the security content of this update, please visit: support.apple.com/kb/HT1222

iPhone, iPod touch and iPad users can expect iOS 4.3 to be launched tomorrow, but may require iTunes 10.2.1 to install.